Notes from the Apothecary: Pumpkin

It’s that magical time of year again, where anything that can be fragranced or flavoured seems to take on the aroma of a combination of vanilla and pumpkin, with the emphasis on the sweetness of this gorgeous gourd. But why do we revere the pumpkin at this time of year? The answer comes from Irish Celtic history, and the seasonal nature of the fruit (yes, it’s a fruit!) itself.

Although the pumpkin, like other squashes, originated in North America, it can now be found all over the world. It’s classed as a ‘winter squash’ due to the fruits ripening around autumn and winter time. This is one of the main reasons it is so widely in use throughout Samhain and into the Thanksgiving and Christmas/Yule periods.

The fabulous thing about pumpkins is that so much of the plant is edible. You have probably eaten the flesh at some point, either in pies, soup or puddings. You may even have eaten pumpkin seeds, which are tasty roasted and salted or used in baked goods such as bread. But did you know you can even eat the flowers of pumpkins? The only downside to this is, if you eat a pumpkin flower, it cannot then be pollinated and grow into a pumpkin!

In Korea and some parts of Africa, even the leaves are eaten. In Zambia, they are boiled and mixed with groundnut paste.

Pumpkin is great in sweet or savoury food, and can be combined with other squashes easily. A touch of chilli adds a fiery zing, and other warming spices such as cinnamon transform a very earthy plant into a symbol of fire.

Growing pumpkins requires a good bit of space, and although you can start them off indoors, they really need moving outside onto a large pile of compost where they can spread out. We only grow our squashes on the allotment, as there simply isn’t room in the garden; not if we want to have space for anything else!

Because the pumpkin was only discovered upon the exploration of North America, some of the older herbals don’t cover it in great depth. In Mrs Grieves’ Modern Herbal, she lumps the pumpkin in with watermelon, although she does clearly state that it is a very different plant. She says the pumpkin is sometimes known as the melon pumpkin, or ‘millions’; a term which has certainly gone out of fashion today.

She states that in combination with other seeds such as melon, cucumber and gourd (Grieves cites this as cucurbita maxima, a south American squash), an emulsion can be formed which is effective for catarrh, bowel problems and fever. She also tells us that melon and pumpkin seeds are good worm remedies, even for tapeworm.

For our furry friends, high-fibre pumpkin can be added to the diet of cats or dogs to aid digestion. It is also sometimes fed to poultry to keep up egg production during the colder months. Always speak to your vet before changing your pet’s or livestock’s diet.

Pumpkins appear throughout folklore and fairy tales, often in themes of transformation. Think of Cinderella, whisked off to her ball in a coach which only a few minutes before was a giant pumpkin. The pumpkin is a symbol of our hearts’ desires, travelling towards our goals and the transformation of dreams into reality.

We mustn’t forget that the coach turned back into the pumpkin at midnight! This reminds us to enjoy what we have while we have it, to grasp the opportunities in front of us as we never know when they might disappear.

A piece of pumpkin or pumpkin seeds on your altar represents autumn moving into winter, the final harvest and goals of self-sufficiency; whether literally through living off the land and growing your own food, or through honing your passion into a craft that can support you.

I will have pumpkin seeds at north in my sacred space, to remind me of all the ‘seeds’ I have planted this year which I hope will grow into greater things even through the cold months; ideas for songs and poems, research into my ‘magical birds’ book, and plans to save money in preparation for our new baby. These are my seeds, and I need to nurture them. Just like the pumpkin, they need care, attention and feeding! Pumpkins need compost, sunshine and water, whereas my ideas need hard work, time and commitment.

The archetypal ‘Jack O’ Lantern’ most likely comes from the Irish and Scottish Celts, who would have carved a face into a turnip or swede, placed a light within and used this as an amulet to ward off evil spirits, or possibly as a guiding light for ancestral or guardian spirits. When colonists came to America carrying these traditions with them, they found the larger and softer pumpkin; a much better vehicle for the carved totems! And so the pumpkin became the new guiding light of Samhain, All Hallow’s Eve and eventually, Hallowe’en.

It’s only the seeds that you need to remove from a pumpkin in order to leave a space for the light inside, and you can keep a few of these seeds to try and cultivate your own plants next year. If you are able to do this (and I appreciate not everyone has the space to grow a pumpkin plant- they are quite large!) this will create a cyclical connection between this year’s and next year’s magic, cementing continuity and your own connection to the turning season.

If this simply isn’t practical, keep a few of the seeds on your altar or in a sacred space, as a reminder of the different stages of life reflected in the changing seasons.

If you scrape some of the flesh out as well as the seeds, keep this and cook with it at Samhain. You are making the most of your pumpkin, using as much of it as you can to avoid waste, and you are connecting your magical lantern to your Samhain feasting.

The lantern can be placed in a window, or on a doorstep if it is safe to do so. If you use a naked flame such as a candle or tealight, please be aware of animals and children, especially during trick-or-treating! The last thing you want is some small child setting themselves on fire or spilling hot wax on themselves. A great alternative is one of those LED candles which you can now pick up very cheaply. 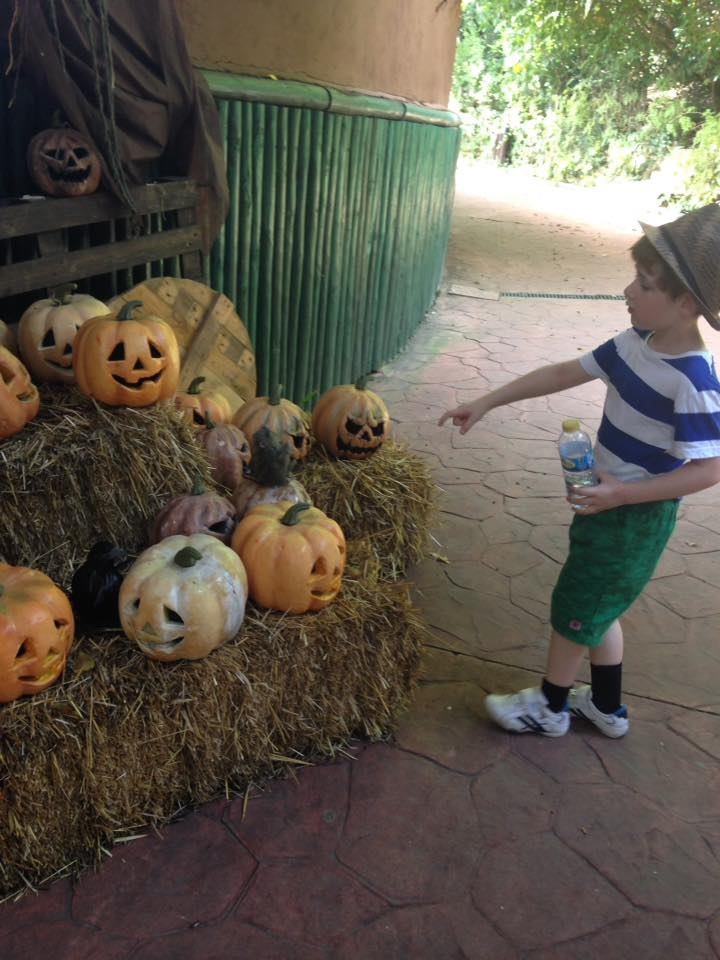 The lantern guards your space, keeping away unwanted visitors, and guiding your ancestral spirits to where they need to be, including back beyond the veil once the period of Samhain has passed.

The word ‘pumpkin’ originates from the Greek word pepon, which means ‘large melon’, which may explain how it sometimes ends up under the melon section in older herbals!

She is the author of A Modern Celt: Seeking the Ancestors and Pagan Portals: Celtic Witchcraft.