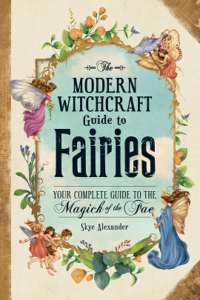 When you hear the word “fairy,” what image comes to mind? A miniature girl with gossamer wings and a sparkly dress, a la Disney’s version of Tinker Bell? A benevolent creature who flits about sprinkling fairy dust everywhere, waving her wand to make children’s wishes come true? If so, you’re in for a surprise.

Like unicorns and mermaids, these magickal entities have been denatured by pop culture, robbed of their mystique and majesty. The fairies of old were nothing like the sugar-coated cartoon characters we envision today. They were powerful beings of a semi-divine nature, who may have descended from the gods and goddesses. According to some tales, they served as the prototypes from which the human race evolved. They possessed amazing, supernatural powers—they could fly, make themselves invisible, shapeshift into humans, animals, plants, or stones, and they lived forever. Some aided human beings, but many were mischievous or even malevolent.

The English word “fairy” may have come from the Latin fatum, meaning “fate,” as did the French derivative fée, the Italian fata, and the Portuguese fada. According to some legends, fairies controlled human destiny. They showed up at a baby’s birth to celebrate the new arrival, as the story of Sleeping Beauty tells us, and to determine the child’s future—which depended on how the parents treated the fairies.

Fairies could provide healing and protection from harm, but they could also inflict illness, shipwreck sailors, and cause soldiers to falter on the battlefield. They could bring riches, but they might also blight crops, destroy livestock, and steal children. As in the human world, the fairy realm has its good guys and its bad actors. Wiccans who follow the Wiccan Rede will not use their connections to fairies for harm; instead, they’ll finds ways to harness their powers for the good of all.

How to Use this Book

In this book, you’ll learn how to reconnect, through Wiccan practices, with these magickal beings who fascinated and frightened our ancestors. You’ll gain insight into their characteristics and behavior. You’ll find out where and how they live. You’ll discover ways to attract and interact safely with fairy helpers. In doing so, if the fairies are friendly, you can improve and enhance your Wiccan powers.

In Part One, I discuss the long-standing links between witches and fairies. Our ancestors believed witches and fairies shared numerous powers, including the ability to control the weather. According to some sources, the fairies taught witches their craft. I also talk about why the two groups can benefit from collaborating today and how working together can help not only us but the planet as well.

You’ll meet some of the best-known fairy families and learn about various types of fairies with whom you may want to do magick—and some you should avoid. Like people, some fairies are better suited to certain kinds of spellwork than others. For instance, leprechauns are solitary old guys and wouldn’t be much good at casting love spells— but they’re skilled in money matters and can help you prosper financially. Nature fairies, who care for the plant world, could be great allies for green witches. I also share some of the things I’ve discovered about where to look for fairies and how to entice them to partner with you, because they’re usually reluctant to deal with humans. Additionally, you’ll learn how to avoid offending the fae, who can be dangerous enemies if you get on the wrong side of them.

Part Two is an open grimoire of spells, rituals, and other activities you can do with the fairies. Each chapter focuses on a particular area of life, such as love, prosperity, protection, healing, and so on. I’ve included a chapter of magickal activities to engage in with the fae on each of the eight sabbats too. Some of these practices will be familiar to you—if you’ve been following the witch’s way for any length of time, you’ve surely used candles, herbs, and gemstones in your work. Performing them with fairies, however, will add a new dimension. Other techniques, such as shapeshifting and shamanic journeying, may be new to you—especially if you’re visiting fairyland for the first time. At the beginning of each chapter, I suggest certain types of fairies that I think might be the most willing and able to assist you in your spellcraft.

At the end of the book is an Appendix that I hope you’ll find helpful and easy to use. This isn’t intended to be all-inclusive—it’s not an encyclopedia—but it can serve as quick reference guide when you’re deciding what to factor into your spells.

Working with the fae and integrating them into your Wiccan practices can be a rewarding experience that brings added depth and breadth to your magickal endeavors. It will enrich your self-knowledge and power. Allying yourself with fairies will also increase your appreciation for the natural world, other worlds, and for all beings who inhabit the physical and nonphysical realms. If you feel drawn to follow this path, you’ll be rewarded on your journey. But proceed with care.

*Excerpted from The Modern Witchcraft Guide to Fairies by Skye Alexander. Copyright © 2021 by Simon & Schuster, Inc. Used with permission of the publisher, Adams Media, an imprint of Simon & Schuster. All rights reserved.

The Modern Witchcraft Guide to Fairies: Your Complete Guide to the Magick of the Fae on Amazon