The Wonder of Fae 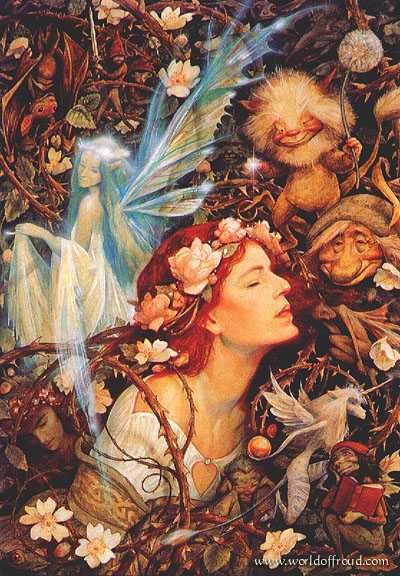 In July the earth is lush and green, the air thick with possibilities. Gardens are in full bloom, the sun glistens off lakes and rivers, and in that special place where poetry meets the soul, we find those enchanting creatures who capture our hearts and imagination, the fae.

Through myth, stories and folklore, which has been passed down over hundreds of years, we learn that there are many species of fae. They may appear in human or animal form, or a mix thereof, as streams of light, cascades of glimmer, or in any other form they wish to present themselves.

William Butler Yeats, in “Irish Fairy and Folk Tales,” speaks of two types of fairies, Solitary Fairies and Trooping Fairies, as did James Macdougall in “Folk Tales and Fairy Lore”.

A Solitary Fairy is often a guardian of a natural area which has been severely abused by humans, or a place considered sacred to the fae.  Sometimes have the appearance of a boogie or a banshee. They often consider humans as an annoyance and have been considered malicious. If one does make contact, it is best for you to ask what they want, for they are very direct and honest. It is then wise to leave the area if you feel unwelcome.

Trooping Fairies are usually found moving along in an orderly fashion. As they can be either friendly or sinister, it is best not to disturb their procession. They are connected with magic as well as transporting spirits of the dead to the Otherworld. It is this race that is associated with the traditional vision of the “Faery Rede”, which occurs on Samhain and Beltane when the veils are thinnest.

Katherine Mary Briggs tells of domesticated fairies which are said to be friendliest, as they bond to the humans whose homes they inhabit, particularly when they are included into domestic life and rituals. They are quite protective and helpful to humans, often guarding the home from fire, theft, or other harm. They are also helpful in locating lost items and enjoy shiny things themselves and will sometimes “borrow” things like keys and jewelry, but will return them when asked. It is customary to set a special place aside for them in a corner of the home or under the stairs where small offerings of gratitude can be left.

Similar to the domestic, though found outdoors, are Stationary Fairies, often called nature spirits or Genii Loci. They are connected to a particular place in nature such as sacred stones, trees and water wells. The Genii Loci can also be guardians of specific animals, plants, or a plot of land. They are very helpful in gathering herbs, especially for charms of love, caring for gardens and lending energy to magical abilities. In exchange, they like offerings of honey, cookies, milk and shiny or pretty stones.

The fifth common race, referred to as Hive Fairies, obtain their name due to their nature to “swarm” when hidden paths open between our worlds. The ancient Scotts called them “The Haunted Wind”, as their initial entrance feels like a sudden cold chill. They move collectively. Each one knows what the other beings know and experience, and are friendly toward humans.

Whatever race you encounter, it is best to treat them as you would any other honored creature, or the earth herself, with kindness, consideration and respect. Each time you are beneath the summer sky, open your heart to listen and your soul to see. The results are sure to be awe inspiring.

Happy July to all!