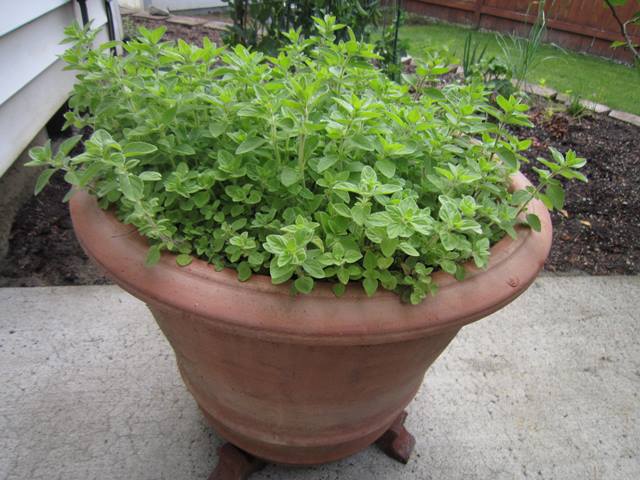 Outside my patio door stands a huge terra cotta pot brimming over with Greek Oregano. This rugged plant has withstood much neglect over the years, requiring only water, an occasional thinning and repotting, to remain lush and green. Although her growth is somewhat diminished during the winter, she provides enough fresh sprigs during the cold months to season a special meal, although sometimes I need to brush a layer of snow off the pot first! The Oregano that I grow is Origanum vulgare and not its milder cousin, Origanum majorana-Sweet Marjoram- with which it is sometimes confused.

Oregano’s genesis is attributed to the Greek Goddess, Aphrodite, who created the herb in her garden on Mount Olympus as a symbol of joy. The name ‘Oregano’ is derived from the Greek words ‘oros’ meaning mountain and ‘ganos’ meaning joy.

Greek couples were crowned with Oregano at their nuptials as a symbol of happiness, love and honor and the herb was placed on the graves of the deceased to bring peace to their spirits. The Romans helped to spread Oregano throughout their empire into Europe and northern Africa, where it was used to flavor meats, fish and wine. Eventually, Oregano found its way into China via the spice road, where its healing properties were highly prized. The English used Oregano as an additive to snuff- a powdered tobacco product often flavored with ingredients such as vanilla, cherry, orange, cinnamon, and snuffed into the nose. It was not until World War II, when American soldiers returned from Italy, that Oregano came ashore in the United States.

I have always grown Oregano solely for culinary use and never really thought much her possible medicinal uses. However, Oregano has some pretty impressive healing properties.

A member of the lamiacae or mint family, Oregano contains carvacrol and thymol which are antibacterial, anti-fungal, anti-parasitic and antiviral. An infusion made with Oregano can help ease indigestion, bloating and flatulence and when made with fresh leaves, can relieve nervous headaches. One reference noted that fresh Oregano leaves can reverse hyperpigmentation of the skin, also known as dark spots or age spots.

To make an infusion, use one teaspoon of herb to one cup of boiling water, allowing it to steep 15 to 20 minutes in a covered container to prevent the volatile oils from escaping.  The usual dosage is one cup up to three times per day. Due to its emmenagogue effects, Oregano should not be used during pregnancy.

Intrigued to find out more about Oregano’s healing properties, I discovered that oil of Oregano has received quite a bit of attention, citing applications for the treatment of candida, staph infections and periodontal disease. It appears that the commercially prepared oil is a standardized preparation of which I am not a huge fan. Standardized herbal preparations concentrate the constituents of the plant believed to be most active. I prefer using the entire plant, as I believe it contains many ‘helper’ constituents whose value has not been studied or recognized.

I have been cutting and drying Oregano throughout the summer, usually once every two weeks. I harvest Oregano in the early morning hours, before the sun has a chance to warm things up and allow the volatile oils to disperse into the air. Although I prefer fresh Oregano, my husband prefers it dried for his prized pasta sauce, his own personal recipe. As I was harvesting some for drying, I decided to try to make a small amount of infused oil, to have on hand for whatever nasty little infection surfaces during the winter months.

I harvested about ½ cup of fresh Oregano, washed it well under cool water, patted dry and allowed it to dry for a day on a clean cotton sacking towel. By allowing the fresh herb to dry for a short period, some of the moisture which can cause infused oils to mold is removed.

The next day, I chopped the leaves, stems, and flowers and placed them into a clean 6 ounce glass jar, completely covering the plant material with organic cold-pressed olive oil. After stirring it to make certain all the Oregano was well mixed with oil, I placed the uncovered jar into my trusty Little Dipper crock pot filled with water and allow it to gently warm for two hours. I then strain the oil, first with a mesh strainer, and lastly with a paper flat-bottom coffee filter, creased to a point (the point allows the oil to strain more quickly) into a sterilized jar. A word of caution here…do not use cone coffee filters for this. They have the unsettling tendency to come apart at the seam.

If you are reusing a jar with a separate liner in the lid, make certain you discard the liner before cleaning/sterilizing your jar for reuse. These liners trap bacteria, causing your oils to mold. Store your lovely oil in the refrigerator to help extend its shelf life.

I was amazed at the enticing fragrance of this infused oil. Although I will use it for healing applications, I also can see many wonderful ways it can be used in cooking and flavoring.

-How to Use Oregano: http://www.anniesremedy.com/herb_detail163.php