Dried beans of many colors are rattling about in zipped, plastic bags. The brown pods of the broccoli rabe are still attached to the stalks waiting for me to harvest them.  The thin, papery husks protect the red orach seed. Poppy pods are like hollow bones rattling on the table. Standing dead fennel yielded a large harvest of seed, as did the calendula. The harvest has been good. 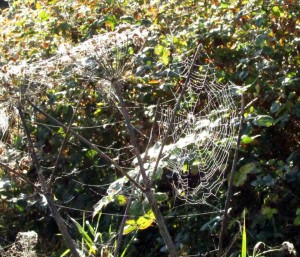 Appeasing the inhabitants of the underworld has been in focus this past month.   To ensure the health of the next harvest, I have been plying them with gifts of grain and meal, gemstones, herbs and wine in the hopes they will protect the cloves of garlic and onion, and the seeds of the beets, broccoli, carrots and broad beans I am planting.  The peas couldn’t wait to be planted. They felt the slightest bit of moisture and burst from the paper packet in long, lovely green trails.

A wand given to me by an old Catawba tree is hanging suspended in the new greenhouse being charged from above with the sun and moon, and from below by the ground’s daily seasonal adjustments, and from the here and now by all the activity in the garden.  I am going to put it to good use in the very near future.

Thoughts of my ancestors have been most present with me in the garden. As I bent over to uproot the dead summer squash vines – my hand landed on my own aching back bringing vivid images of my grandmother in the garden doing the same thing and instructing a tiny me to “get that” whatever-it-was she was reaching for as she rubbed the muscular discomforts of age. Her face was so clear and I could sense each etched line and crease as I share some distinct genetic characteristic.  Instinctively, I ran my dirty fingers over the forehead lines and chin that she passed down to me and the very roots of my own existence felt more alive.

I dug a doorway to the great below and began pouring libations for the ancestors.  As I poured, the sound of my grandfather’s voice reverberated through me, mirthfully inquiring as to why I hadn’t poured his in a coffee cup. Inside joke connecting me deeply to the places I come from.  All he wanted from me was a hat; finding a hat small enough to be buried in the garden just for him proved challenging, but was able to be done.  I planted a carrot over the top of it to symbolize the feathers that were in his hat during his lifetime. 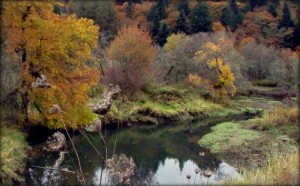 My mother wouldn’t accept wine as a libation. Scotch, she demanded. Or Gin. Or maybe it was best I bring both. So both it was for her, and she gulped it down with ease. I shared a bit of it with her, recoiling as it burned all the way down my throat and into my belly.  An opened can of foul-smelling sardines with crackers and she was dealing from a deck of cards. Again, my roots were enlivened, nourished and growing.  I imagine this sensation to be similar to that of the grape stalk and vines when I feed them guano or salmon.

Planting the winter crops within and without, above and below, and getting ready for the wind to blow the last of the leaves from the trees. What have you planted in your garden, dear reader?