Many people are under the impression that faeries are largely a Victorian invention, but as most people with even a passing interest in them will tell you,- earth spirits have been encountered since the dawn of mankind. They are mentioned by various names in most, if not all, cultures. The faeries are a large part of my life, and are constant,- though usually invisible, companions. Yet I would not describe myself as a member of the “Faery Faith”

I dislike the term “Faery faith”,- for me it is not a matter of faith but of personal experience. For myself, and many others the existence of faeries is not a matter for dispute. We know they exist and we are not in the slightest bit concerned that some people might think that we are delusional. I have seen and experienced them in several forms. They are not necessarily the tiny winged creatures depicted in the “Cottingly Fairy” photographs,- although I have seen them in this form too! They are powerful earth spirits and often associated with the dead and with the ancestors. They are often helpful,- but also capricious. I have learned this to my cost,- and only ask for their help in the direst of needs. The results can be very unpredictable! These days I feel the needs to include such Proviso’s as: “…and without setting anyone’s trousers on fire” etc… etc…

A Trip to Richmond Park

I am sure my chaperone was sitting on a bench, when I last looked around.

She is such a troubled, worried soul and tires so easily from all her ague.

Her little book of poetry was nestled in her lap, and she was sleeping safe and sound.

Her childhood spent in India has left her rather poorly, and her mind’s a little vague.

A cousin of my mothers from the Dorset family line, I think they said.

Whose father went to India to manage a plantation or some such.

It’s whispered that the poor man got a fever and became a little bit unsettled in the head.

They had to bring him home and send his younger brother out to oversee, instead.

Neither, in the distance, can I see the coach and four that brought us here.

It’s sleek black panels and the burly servants, who assured a sense of safety and ease.

It seemed a lovely morning for a drive out to the park, to have a picnic and to see the deer.

But now I’m feeling very much alone, and everything around me seems so queer.

Tiny child-like figures seem to flit around. I see them from the corners of my eyes.

I sit and I pretend to read my book, for surely, when I next look up,- the park will be just as it was before.

But now I hear them singing,- all their tiny voices ringing out like pretty silver bells.

“Come play with us, sweet maiden. Come and dance with us around our faerie dell”.

Are they faeries?,- surely not! Perhaps the sunshine on my head has shone a little hot?

But peeking shyly round my book, I see, a pretty bunch of tiny creatures peering back at me!

Rainbow wings like oriental butterflies and cheeky faces with such marble skin and charming eyes.

They seemed to offer such delightful company, my feet began to dance!,- to my surprise.

Round and round we twirl until my head gets in a spin, and every time I try to stop my feet begin again.

I can no longer feel the ground, I’m spinning in the air. The fun has stopped and now I start to feel a little fear.

Opening my purse,- I throw my rosary upon the ground. The songs and laughter fade away like morning dew.

In the distance I can hear dreadful, moaning sound. I open up my eyes to find myself alone and lying on a faery mound. 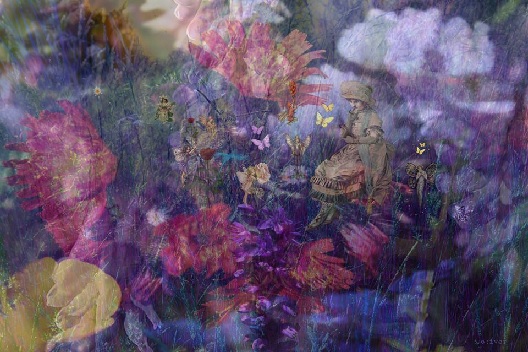 I have seen them in their deeper, and darker aspects and I fully understand the reluctance of previous generations to disturb faery forts and burial mounds. To me, they will always the Tuatha De Danaan,- The clan of the Goddess Danu. They were a powerful ancient Irish race with great magical skills. They were defeated in battle by the Milesians, and the great bard, Amergin White Knee, allotted to them, all of the island that was underneath the earth. As the centuries passed and their fame diminished they almost shrank into oblivion. They stayed close to their underground realms and only came up on certain occasions and on feast days. Even fifty years ago, there were many in the west of Ireland who have seen the Gentry as they are called.. but few have the openness of mind that would allow them to see the little people these days.

Do you remember when, so long ago, we felt the flowers grow?

We watched them all awaken underneath the sunlit snow.

Snowdrops and daffodils, and violas of purple hue,

Spring would quickly follow with a host of things to do.

I remember flying underneath the red-streaked, summer skies,

Every flutter of our silken wings was spurred by endless joy.

Listening to the singing of the blackbird, at the dawning of the night.

There were feasts a plenty, with bread and cheese upon the hawthorn fair.

Hazelnuts and haws, with nettle soup, while marigolds and roses blessed the summer air.

Blackberries so sweet, that hung from every roadside hedge.

Elderberry wine to slake our thirst, went quickly to our heads.

We gentle folk were welcome in those days, with bread and milk at every cottage door.

And we would bless the farm to make the crops grow strong, where we found kindness for the poor.

Then we would ramble home, through portals scattered far and wide across the land.

Back to the Land of Sidhe, in cheerful song, with all the Faerie band. 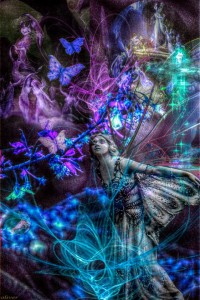