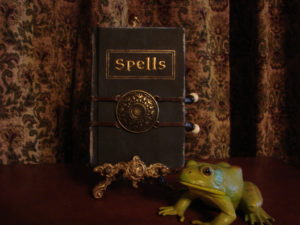 “Eye of newt, and toe of frog,

Wool of bat, and tongue of dog,

For a charm of powerful trouble,

So said the 2nd Witch in Macbeth (IV, i, 14-15), as she and two other ugly witches stir the bubbling contents of their cauldron. It’s one of the most familiar spell castings associated with witchcraft.

In Shakespeare’s time, people believed in witches and their powers to do evil.

Every culture has magick in its history. Some oral traditions and written documentation have survived, which has led some groups to choose to follow old spells to the letter. The more eclectic the witch, the more likely he or she adapts and improvises.

You can easily find spells that call for seemingly ridiculous or difficult workings. There’s one to get rid of your daughter’s boyfriend by hard boiling an egg laid by a black hen in urine (yours, his or hers), peeling it and feeding half to a dog and half to a cat while saying a specific sentence about how the couple shall become enemies just as the animals are natural enemies.

There must be something magical about black hens, because if you want a long life, you’re supposed to eat the first egg laid by one.

One love spell calls for cooking a chicken heart, drying it, grinding it into a powder, adding powdered coriander seeds to it and then putting small amounts into your beloved’s food to inspire passion. Another directs you to fill a shot glass with your sweat and perhaps a drop of menstrual blood, then place it atop a copper sheet and hide it somewhere the one you want to love you will walk past.

To get someone to return to you, a spell calls for wrapping three fresh eggs and a teaspoon of salt in an article of clothing belonging to that person and burying it where a footpath branches out into a fork, forming a Y shape. Saying the absent person’s name three times, you then state your wishes only once, quietly to yourself, cover the hole and leave without looking back.

A love spell calls for stealing three hairs from a woman, one at a time … on three separate occasions … while she’s sleeping … and, for maximum effect, the hair should be taken from near the nape of the neck. The strands are then to be braided and pushed into a crack of a tree.

Iron boxes, a mandrake root exposed to moonlight, fenugreek seeds and a divining rod cut from mistletoe growing on hazel or thorn trees are all parts of money spells.

Some profess that these methods have stood the test of time. Other witches believe not all that that is necessary, and might even say that magick is stronger with it’s organic and personally meaningful.

Whether you choose to follow complicated, traditional spells to the letter or you are willing to improvise and keep it simple, it’s still magick you are working. Done with intention, respect and personal power, either should be effective.

If you don’t agree, let’s have a discussion below.