This is not going to be an essay of whether to celebrate St. Patty’s Day or not. I know that many Pagans do not celebrate St. Patty’s day with the righteousness of Jehovah Witnesses not celebrating Christmases and almost every other holiday. I am not one of those people. When I was growing up Catholic in the 1960’s and 1970’s, Saint Patrick’s Day was a secular holiday that was celebrated in my public school – it didn’t have anything to do with the Catholic Church at all – nor did Valentine’s Day, for that matter – another thoroughly secular holiday, only celebrated in my public school.

I am the type of person who believes in celebrating everything. Living in Buffalo, New York, this is really the way it is here – everyone celebrates everything, regardless of religion or cultural background – we are a partying people. Google it – Buffalo rivals much larger cities New York, Boston and Chicago in its St. Patty’s day celebrations. We have two parades on two separate days in two separate neighborhoods and they are both well attended. It’s not all Christians out there wearing the green. Everyone’s Irish – no matter if their last name is Mueller or Paderewski or Brucato or Khun.

I long ago stopped partying as hearty as I could – it just doesn’t work for me anymore. But I still like to eat the traditional foods as much as I can. And whether you are cooking for St. Patty’s Day on the weekend of March 17, 2018 or you are having a group of people over for an Ostara ritual, a plate of corned beef and cabbage is always a springtime delight.

According to my Joy of Cooking, corned beef got its name in Anglo-Saxon England when beef was preserved with salt the size of a kernel of wheat – called “corn” – not the yellow corn that Americans know, that would be “maize” – and unknown to Europe at that that time, anyway. Note the similarity of the words “corn” and “kernel”. “Corning” was a type of preservation so that meat could be kept for months. Salting meats and fish was ancient – every culture has ways of doing this to preserve food through the lean months. The way it was done in the middle ages meant that the meat was much saltier than we would recognize it nowadays – probably much saltier than we would find palatable! Modern refrigeration and brining methods has changed this and the corned beefs and pastramis that we eat today are much less salt and much more flavor than their medieval ancestors.

Usually corned beef is on sale this time of year. Look for either a good-sized brisket or round – I like a brisket because it’s more traditional but a round generally has less fat and will cook down less dramatically. You can get them from a butcher but generally they are prepacked in heavy plastic, with the brine and a small pack of seasonings included.

You can cook it in a slow-cooker – it takes about six to eight hours. I looked up how to do it in the Insta-Pot pressure cooker – it would take 90 minutes for the meat and another 10 or so minutes for the potatoes, carrots and cabbage. But I opted to do it the old-fashioned way – on the stove-top, in a large pot. The package also has instructions on how to cook it.

a corned beef, between 3-5 pounds.

Contents of the seasoning packet.

4 to 6 small white or red potatoes, or larger ones, cut into quarters.

Several small white onions or a larger one, cut into wedges.

Half a cabbage, cut into wedges.

Take the corned beef out of the packing and rinse it off. Set it in the pot and cover with cold water. Add the seasoning packet. Put on the stove and bring to a boil.

You don’t have to do this, but I do: I add a stalk of celery, a carrot and a piece of onion to the water. Just for added flavor and general food magic.

When the water comes to a boil, turn it down to a simmer. You’ll notice that there’s “scum” on the top of the water, so take a spoon and skim it off and discard it.

Now – some recipes say to cover the meat and let it simmer for several hours – some say to leave it uncovered. I personally always cover my corn beef as it cooks. Once in a while, I take the cover off and poke it with a fork and turn it over. But generally, I leave it alone and go about other business.

After two or so hours, you will notice that the meat has shrunk quite a bit! The aroma of the corned beef spiced should be drifting through your kitchen and making you hungry for dinner. This is when you should remove the celery and carrot and onion that was added when you first started – if you did add them. If not, just add the potatoes, carrots and onion wedges.

Cover the pot again and after about a half-hour to forty-five minutes, add the cabbage wedges. These only take fifteen minutes to cook! Dinner is almost ready! Set the table! 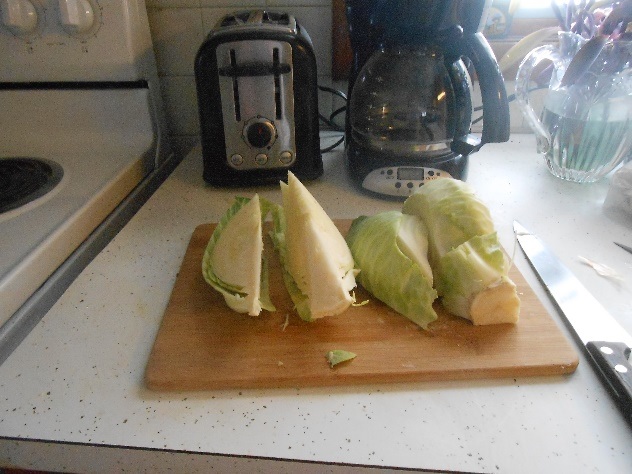 My son was over the day I cooked this and I almost forgot to take a picture of a fixed plate of the finished meal! We were having such a good time together, as we always do. But here is it:

Naturally, that’s my small plate and not the large one I prepared for my son. I should have taken a picture of that plate but he had it almost finished before I had mine even served up!

Anyway, this is a meal that always satisfies. I usually take the leftovers and make corned-beef hash – just chop everything up and fry it all together with a little butter. But that’s if there is any leftovers! Usually the meat gets all eaten up and there’s just a few potatoes and carrots left and a wedge of cabbage. There’s never any complaints when I cook up this meal.

So try this one out. It’s wicked easy – it practically cooks itself! If that’s not magic, I don’t know what is! Brightest blessings this Ostara season!

Dex and Ken. “How Do You ‘Corn’ Beef?” https://www.straightdope.com/columns/read/2153/how-do-you-corn-beef/

Her philosophy about religion and magic is that it must be thoroughly based in science and logic. She is Dianic Wiccan and she is solitary.