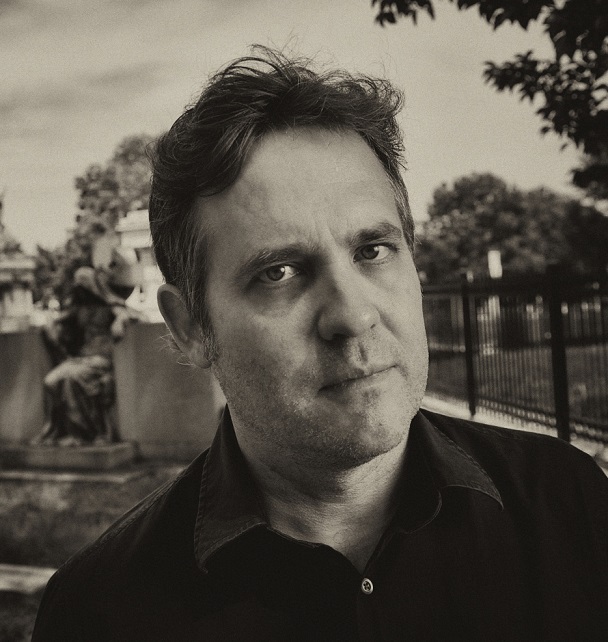 In his latest book, Michael H. Hughes brings together activism and magic as tools for the resistance.

“What I’ve discovered doing research for this book is witchcraft, in particular magic, has always been the tool of oppressed people. When you are out of other means of getting something done, you still do what you have to do, and in many cases that involves magic,” he said.

Enslaved Africans used hoodoo and root work. Voodoo was instrumental in the uprising against Haiti’s white class. In medieval Europe, there were poppets and wax figures used against royalty.

“The more you dig into the history of magic used as a tool against oppression, the more emerges. There’s even a book that just came out serendipitously for my research, I must say, called ‘Magic as a Political Crime in Medieval and Early Modern England: A History of Sorcery and Treason (International Library of Historical Studies)

In the introduction to his book that is due coming out September 8, in advance of the midterm elections, he states, “We are living in a time of great turmoil at the edge of history. A time in which liberal, democratic values and ideas that have withstood wars and despots are under attack by rising tides of nationalism and racial supremacy; in which the industrial model of our society is crumbling, and with it the patriarchal, hierarchical structure that has kept it in place. An era in which our very existence as a species is imperiled by a warming planet, overpopulation, and our unquenchable desire for material goods.”

For those who don’t wish to give up and are willing to advocate for change, this book can serve as a toolkit to manifest equality and peace. It contains spells, rituals and historical examples to help readers put their magic to work to make the world a better place.

Magic, Hughes explained, is “innate in us. It wants to express itself.”

What Hughes found when he stripped away erroneous history and dogma were folk traditions and indigenous traditions he considers the roots of magic – the basic techniques that are universal. Those include sympathetic magic and elemental associations. For instance, he noted, traditions all over the world consider fire a creator and a destroyer. Everywhere people work with the four directions. Magic words, chants, song and dance are used in every culture.

“I was just working on a chapter on talisman and amulets. I was looking into how they evolved and where they came from. It’s so fascinating to think that Africans from the Congo are brought to this continent and they meet Native Americans who were using medicine pouches that there’s no difference between the Congolese bags that they wore around their necks, even to the same natural items that they would have in their bags,” he said in early March as he was putting in long hours to get the finished manuscript to his publisher.

Ancient Egyptians wrote on papyrus they rolled up and put in a little tube that they wore around their necks. Observant adult Jews put on tefillin, small black leather boxes holding parchment inscribed with verses from the Torah. Catholics are given the scapular to wear.

“So even if a lot of these don’t come from the same roots, they’re universal. For me, it seems to argue for the fact it works. It’s effective magic. When you carry around items symbolic, important, protective or powerful on your body, then, for whatever reason, as humans we like to do that. So if you don’t believe in magic, then you have to assume it’s somehow part of our psychological makeup or something like that. But if you believe in magic like I do, then the ubiquity of all these kinds of traditions seem to indicate that it probably works; that’s why people do it.”

The Spell to Bind Donald Trump and All Those Who Abet Him led to this book.

“Originally I was going to write a book on magic, theoretical and practical magic before this Trump spell took off and had a life of its own and dragged me along with it,” Hughes said.

At the time he crafted the binding spell used for the first time February 24, 2017 , Hughes said, “I really thought, ‘This is just going to be some small thing that I publish [on Medium] and a few people, maybe the pagan community, they’ll argue about it,’ which they did. But wow, it really just blew up beyond anything I could have imagined. The whole thing has been a really surreal experience.”

Within days, it went viral.

“A couple of stories that blow my mind,” he said. “One is I was going to do the ritual. I had about 30 or 40 people who were going to gather to do it and the night of it I went to pick up some wine and beer for afterward and I walk into some random liquor store in Baltimore and the woman, probably in her 20s, said, ‘Do you want your receipt?’ I said, ‘Yeah, yeah I’m hoping to write this off. I’m cursing Donald Trump tonight.’ And without batting an eye she said, “Oh, do you have the unflattering photo?” I just stared at her. She said, ‘Me and my friends are doing it later tonight.’

“I was dumbfounded. I knew it was circulating pretty wildly. The entire week after I published it, I was on the phone all day. People calling, reporters emailing. I did so many interviews it was ridiculous. As the ritual got closer, I realized how big it was getting, I started getting calls from TV reporters [wanting to film the ritual]. I didn’t want reporters, especially at the first time. You never know how they’re going to portray it. I didn’t want it to be really intrusive … but they were so insistent on filming it, I said, ‘Oh, I hear there are going to be people at Trump Tower doing it.’ I just made that up.’”

When the film crews showed up at Trump Tower in New York City, there were 20 witches outside. More were in front of his tower in Chicago.

“It happened and I had no idea. I really just pulled that out of thin air thinking, ‘Well, maybe there’ll be some people there doing it’ and sure enough they showed up and did the ritual.”

The witches weren’t the only ones. Thousands upon thousands of occultists and magicians took part. Even Christians and Buddhists – many tweaking it to use their way in their tradition – performed the ritual. Many had never never performed a ritual in their lives. It became the largest and longest continuing magical working in history.

Did it work? Well, Trump’s initial travel ban was rescinded, the repeal of the Affordable Care Act was halted, Robert Mueller’s noose has tightened and no wall is being built. However, the tax bill passing, the threat of war and the assault on the environment show there is still much work to be done. Each month, members of the magic resistance continue to perform the ritual. Hughes also offered a daily version as well.

“I realized that the fundamental Christians were going to freak out, even Evangelicals, but I was really surprised at some of the vehemence from the pagan community. I guess I should have known better, but I was still a little surprised by the number of witches who said it was awful and I was destroying the reputation of witchcraft. First of all, I’m not a witch. I don’t identify as a witch. But obviously this became witches versus Trump and no matter how many times I … [said] ‘This is magic. I’m a magician, I’m not a witch.’ It just went right over their heads.”

The magic resistance that galvanized around the binding spell is committed to using spells, rituals, prayer, divination and other techniques to resist or impede dangerous or oppressive political movements, politicians, and actions. This, Hughes states in the introduction to his book, includes “authoritarianism, white supremacy, racism, misogyny, xenophobia, environmental destruction, attacks on marginalized populations, as well as other harmful ideologies. It can be viewed as a magical form of self-defense, or defense of others. But it is not just about resistance. This movement also uses magical practices to promote progressive, inclusive, liberating, and empowering political, environmental, economic, and social causes.”

“The magic in this book can be broadly adapted to many traditions, and is meant to serve as a foundation for experimentation and incorporation into other progressive and inclusive causes,” he said.

One of the spells Hughes offers is “Hands Off Laws Off: Hecate Invocation” to protect women’s reproductive rights, women’s health clinics and their staff. Meant to only be done at night, its components include a red candle, bay leaves, myrrh, a representation of the lawmaker or organization, a call to Hecate, and a chant ending with “Hands off/Laws off.”

His “Healing the Earth (Microcosm Ritual)” uses a pot of earth, a green candle, stones or crystals, feathers, an edible herb plant, a small representation of an animal, a prayer, and optional tarot cards of the moon and the sun. It has people caring for a plant as a representation of caring for the entire earth – and the magic can he “hidden in plain sight.”

The “thoughts and prayers” offered by politicians inspired a spell called, “We Shall Form a Circle to Protect Our Children” that uses a white candle and a piece of rose quartz.

These, like the others, are based on standard magical elements, directional attunement, ancestor communications, calls to a spirit, astrological influences. They are not part of any one particular tradition and can be modified to align with anyone’s practice.

“I always felt like the world was a magical place,” Hughes said. “My thinking has always been sort of magical, even before I understood the magic in theory, as a kid, I would draw something to manifest it or just little sort of ritualistic things I would do in my life even before I knew that was practical magic. It was actually in my early 20s when I really started immersing myself in reading magic and occultism.”

You don’t have to understand how magic works or even believe in magic for the social justice spells Hughes provides to work, as long as they are done sincerely, with full commitment and energy. After all, people who play lucky lottery numbers, pray for healing, throw a coin into a well or leave flowers at the grave of a loved one are all practicing magic.

As the introduction on the yet-to-be-published book states, “If you’ve ever felt disillusioned or burned out because of the slow progress of social change, this magical work can nurture and support you, sharpening your focus and resolve for a more sustained, long-term activism.”

For more about Michael H. Hughes, his earlier trilogy and his blog, visit his website.