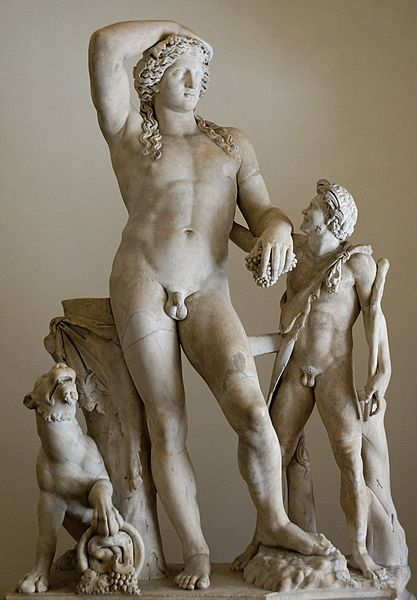 This month we get to know Dionysos, the Olympian god of the grape harvest, wine and wine making as well as the god of ritual madness, wild frenzy, festivity and pleasure. He is also called Bacchus.

He was usually accompanied by Satyrs (lustful, drunken woodland deities who were part human and part horse or goat) and Mainades (frenzied female devotees).

The thyrsos (a staff topped with a pinecone), a crown of ivy, fruiting grapevines, a drinking cup and a panther are all associated with him. Frequently represented in ancient art, he was first shown as a mature, bearded adult wearing an ivy wreath and a long robe that was sometimes draped with the skin of a fawn or a feline. In later times, he was depicted as youthful and beardless, effeminate, and partially or entirely nude.As such he is among the most versatile and elusive Greek gods.

According to mythagora.com, Dionysos’ life began with intrigue and disaster. “Zeus was attracted to the lovely princess of Thebes but his appreciation of Thyone did not escape the notice of his sister/wife, Hera. The vengeful goddess dared not interfere overtly with Zeus’s affairs but she was a master of subtlety. When it became obvious that Thyone was pregnant, Hera enchanted Thyone and induced her ask Zeus to come to her in his radiant splendor. Zeus was flattered and revealed himself to Thyone in all his flaming glory … she was utterly consumed by the flames.

“Zeus’s son Hermes rescued Thyone’s premature child from the conflagration that consumed Thyone’s mortal body and gave the babe to a woman named Makris, daughter of Aristaios, on the island of Euboia. Makris did what she could to sooth the child but Hera was quick to realize what had happened … she drove Makris from her home. Zeus took the infant from Makris and sewed it into his thigh so that it might have his protection.”

Dionysos later journeys to the underworld, gets his mother and takes “her to Olympus where Zeus transformed into the goddess Thyone,” according to the Theo Greek Mythology website.

When Dionysos and his companions as were traveling through the Land of Thrakian, the king drove them into the sea. “As punishment,” the website states, “the god inflicted him with madness causing him to murder his wife and son and mutilate himself with an axe.”

When King Pentheus of Thebes refused to accept Dionysos’ divinity, Dionysos retaliated by driving the king’s daughters into a crazed frenzy and they tore him apart limb from limb, Theo Greek Mythology states.

Another myth shared on the website tells of Dionysos traveling through the Aegean Sea when he was captured by a band of Tyrrhenian pirates who planned to sell him into slavery. “The god infested their ship with phantoms of creeping vines and wild beasts, and in terror the men leapt overboard and were transformed into dolphins.”

Dionysos married princess Ariadne of Krete (Crete) whom he found abandoned by Theseus on an island.

He traveled as far as India, and upon his return to Greece, those who welcomed him adopted his rituals. His followers also wore or carried pinecone-topped staffs, ivy crowns and drinking cups. Dionysos punished those who rejected him with madness or physical afflictions, or he would turn them into animals. Over time, drinking wine became his sacrament, even to the point of drunkenness.

According to N.S. Gill’s article on Thoughtco.com, “Dionysos is a patron of the theater and an agricultural/fertility god. … Writers often contrast Dionysus with his half-brother Apollo. Where Apollo personifies the cerebral aspects of mankind, Dionysus represents the libido and gratification.”

Despite being the creator and god of wine, the ritual madness associated with Dionysus did not involve alcohol or drugs. “Their wild dancing and estate ecstatic behaviour were interpreted as ‘madness’ only by the uninitiated,” according to the Ancient World Project at the University of Michigan.

Greek theater is said to come from the worship of Dionysus in Athens. The Theater of Dionysus held 17,000. Plays were performed honoring Dionysus as god of wine. It’s said that tragedies dramatized his negative and destructive traits while comedies incorporated innocence, humor and his many festivals

When you incorporate wine into your celebrations, rituals, or for cakes and ale, honoring Dionysus can bring fertility and gratification.