There are two gemstones claiming the name of the Faerie (or Fairy) Cross or Stone.  How do they differ and how do you choose which one you want to use?  Let’s investigate the candidates. 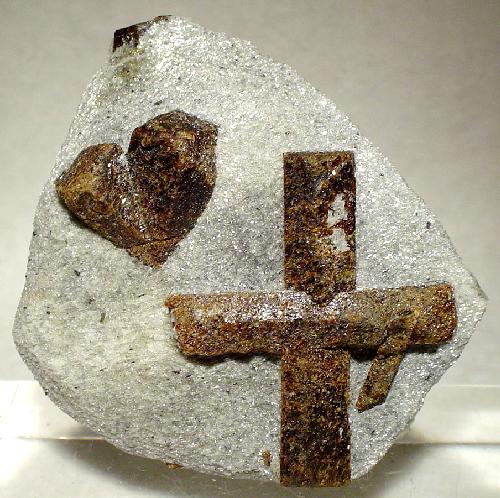 Known in the greater part of the literature available as the “Faerie Stone” or “Faerie Cross,” legend says the tears of faeries formed the crosses when they heard about the death of Jesus.  Many believe the stones protect the wearer against witchcraft, sickness, accidents and disaster.

We derive the name Staurolite from the Greek words stauros (cross) and lithos (stone).  Crystal twinning occurs when two separate crystals share some of the same crystal lattice points in a symmetrical manner.  The result is an intergrowth of two separate crystals in a variety of specific configurations; in this case, a cross.  The cross can be twinned at sixty degrees, as in St. Andrew’s cross, or ninety degrees, as in the Greek cross.  Staurolite is red brown to black with a rather complex chemical formula, mostly iron, magnesium and zinc. 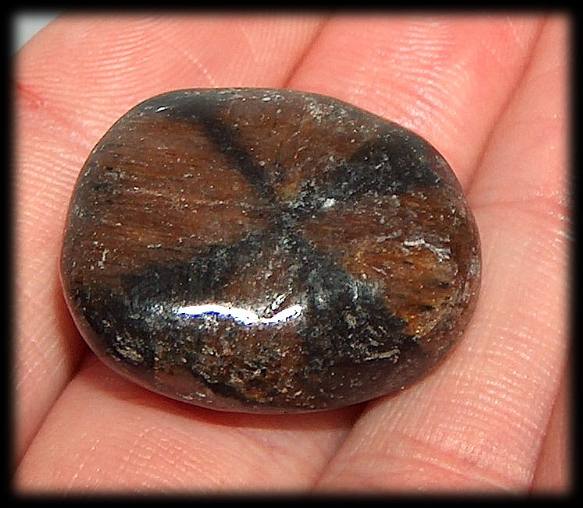 Commonly called a “Cross Stone,” you will still find many who call it a “Faerie Stone,” as well.  Sometimes called baseler taufstein (baptismal stone) or lapis crucifer (cross stone), the stone was used as an amulet at baptisms in the 18th century.  Believers said the stone would stanch the flow of blood from any part of the body if worn against the skin, and it could also increase the secretion of milk.  Worn around the neck, a chiastolite cured all kinds of fevers and the cross it bore drove away evil spirits from the neighborhood of the wearer.

We derive the name Chiastolite from the Greek words chiastos (cross marked) and lithos (stone).  Chiastolite is a variety of Andalusite, a silicate mineral consisting of aluminum, silicon and oxygen. Noted for its distinctive cross-shaped black inclusions of graphite, you can find this stone in white, red, brown, orange and green, with brown being predominate.

Although staurolite has an impressive pedigree when it comes to the name “faerie cross,” I’m rather troubled by the density of iron in the twinned crystals.  Iron is what gives these crystals their red brown to black coloring.  For whatever reason (hmm, I foresee a column topic), faeries abhor iron and I personally do not use any tools that contain it.  If your purpose is to ward yourself against malevolent faeries, then this is the stone for you.  However, if you wish to communicate and interact with the fae realm while retaining a degree of protection, I recommend a chiastolite.

As in all things pagan, fae and witchy, it is up to you to review the material, apply your cognitive thinking skills, and come to your own conclusions.

Faerie blessings and blessed be.