Hel – Norse Goddess of the Underworld 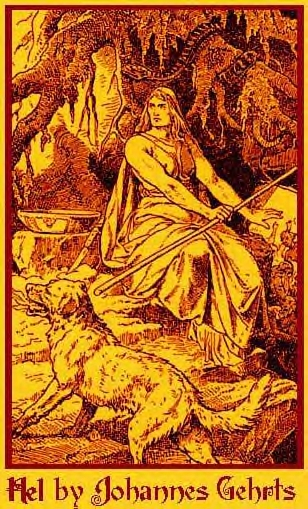 As we transition to Spring, let us look at one of the biggest transformational Goddesses in Norse Mythology – Hel.  Hel is the Norse ruler and Goddess of the Underworld. The top half of her body is a woman, the bottom half of her body is only skeleton.  She is the daughter of trickster Loki and the frost giantess Angrboda.  Odin found her to be hideous and because of her appearance and the fact she was daughter of Loki, he banished her to the underworld of Hel (same as her name), also known as Helheim.  (This should not be confused with the Christian interpretation of the punishment of Hell.)  However, it seems that Hel was okay with being Queen of the Underworld and gave Odin a gift of two ravens named “Huginn” and “Muninn” (translated to “Thought” and “Memory”).  These ravens opened the passageway between both realms.

Hel ruled so powerfully that when Odin’s son Balder died at the hands of his brother Hod after being tricked by Loki, she would not return him unless everyone and everything in the world cry over him.   Only one giantess, Thokk, would not cry and so Balder was not returned.  It turned out that Thokk was actually Loki in disguise. Hel did this to prove the point that Gods are powerless over death.

When people died from illness, old age or from criminal behavior, they were brought to Hel instead of Valhalla, where people went if they died in battle.  Hel would then judge these souls to their fate.  If people died as cowards, Hel would judge them to a life in the underworld that was cold, dark, dismal and full of torture.  Life would be miserable and full of pain if you were to go to Hel based on bad behavior.  (Hel’s realm was twisted by those religions that wanted people to be afraid of going to “Hell” if they didn’t live a righteous life.)

Hel also would watch over children and mothers who died in childbirth and was also known to be a protector of children because of her caring for children of all ages.  Hel would also watch over the souls getting ready for reincarnation.  So, as much as Hel was seen as only a cold and dark place, it actually did have places that were peaceful.   She also is associated with mothering (Isis) and transition between the worlds (Hecate).

Hel would be the deity to ask for help in contacting your ancestors.  If you have a loved one who has died or who is dying, you can work with her in mediumship work, ask her to help those transitioning to the other side or do Shamanic work, since this connects ordinary and non-ordinary reality (for example, Soul Retrieval).  Stones that would be good when working with Hel are jet, obsidian and onyx.