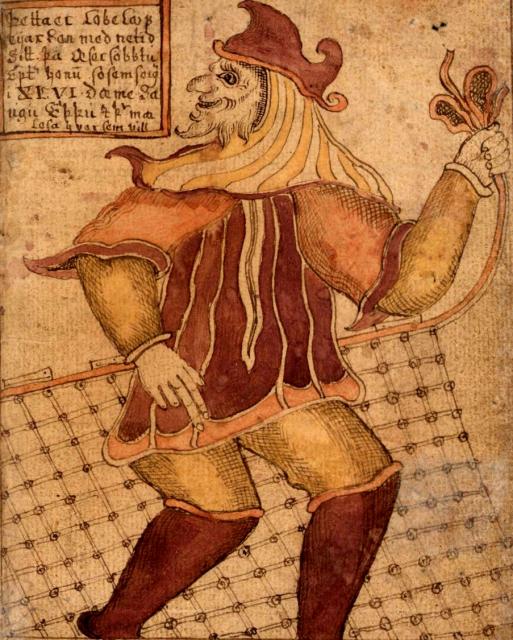 and more are used to describe somebody who’s acting goofy or silly. These words also

describe the sort of actions that fall under the realm of the Trickster Gods.  In every

mythology there is at least one god, goddess or being that is considered a trickster.

For the Native Americans it was the Coyote and the Raven, for the Greeks it was Prometheus,

Hermes, Sisyphus and others, the Celtics had leprechauns, fairies, and beings of that nature.

The Norse pantheon however had Loki. In fact..mention the words Trickster God and the first

person most people name is Loki. Norse mythology was the mythos of the vikings. Beings

like Thor; god of thunder and lightning also wielded the hammer Mjollnir, Odin; ruler of the

universe and ruler of all the deities, Heimdall; creator of mankind and watcher of the Bifrost

Valkryies who were the battle angels and ALWAYS female.  Loki however was a special

case. He’s considered a god but his origin is that of a frost giant. The giants and the gods

differed much like the Greek Titans and Gods. He starts out as a mischief causing, joke

pulling, prank loving misfit. Somebody that was good for entertainment….no so good

for when serious work needed to be done.  Although connected with fire and magic, Loki

is better known for his mischief, shape changing ability. He’s also known for fathering (in one

case mothering) with the giantess Angerboda; Hel the goddess of death, Fenrir the giant wolf

serpent. In the case of being a mother, Loki helped the Gods of Asgard out. The giant

finished he would gain the sun and moon as payment. He would also gain Odin’s wife Frigg

too. The god were sure they would lose so they chose not to accept Hrimthurs’ wager but Loki

was quite confident that Hrimthurs couldn’t finish in a single winter, so he goaded the gods

into accepting the bet. With his stallion Svadilfari, who was able to haul the heavy rocks

quickly, Hrimthurs was making good on his wager. Seeing this, the gods forced Loki to

sabotage the bet. Loki turned himself into a mare and led Svadilfari away into the forest.

Without his stallion, Hrimthurs lost the bet. As a  result of the forest frolick with Svadilfari,

Loki ended up prengant and gave birth to Sleipnir, an eight legged colt who would become

Odin’s magical steed.  Although Loki’s pranks and mischief were generally lighthearted, they

became darker as time went on. The darkest being when he became responsible for the

death of Balder.  Balder was the god of beauty and was loved by everyone and everything.

Ragnarok was coming.  To prevent this, Frigg went around to every animal, god, goddess,

creature, and plant making them promise to not harm Balder. The only plant she did not get

promise. Loki tricked Frigg into revealing the only thing that could kill Balder and upon

finding out, Loki coaxed the blind god Hod, into joining in a game of throwning things at

Balder. This was a favorite pastime of the deities as Balder could not be harmed. Loki handed

Hod a sprig of mistletoe and directed his aim. Hod threw the sprig as hard as he could and

everyone watched in horror as it pierced Balder who died instantly. For this crime Loki was

punished severly. He was bound by three rocks, one between his shoulders, another under

his loins and the last beneath his knees. A venomous snake was placed above his head and

dripped venom on him for eternity. His wife Sigyn, who  remained faithful to him despite his

fathering beings with the giantess Angerboda, lovingly collected the venom in a bowl so that

it would not drip upon Loki. However  when the bowl filled, she had to leave to empty it and

this left Loki unprotected. When the venom hit his bare skin, he would writhe about in pain

and cause earthquakes. Ragnarok was the end of days for the gods, the day they would go to

war and fight amongst themselves. When Loki’s chains broke and he was freed, it was he who

lead the giants into battle. Loki killed Heimdall but also died at Heimdall’s hand.  As much

fun as mischief and pranks are they can be taken too far. Not even Gods are immune to the

allure and excitement of pulling a prank on somebody or acting foolish, nor are they immune

to the consequences that come from causing such foolish acts.