Cultivating Patience & Boundaries in the Garden 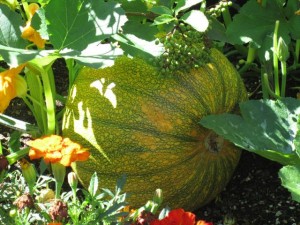 This is a bittersweet time in the herb garden as the days grow shorter and temperatures are beginning to cool. The plants which have been attentively nurtured since early spring are now sporting an overgrown and somewhat rangy appearance. Many are yellowing, setting seed, and turning their growth inward to their roots to prepare for the winter respite.

This has been a very prolific gardening season for me, re-introducing my herbal plant friends back into their newly expanded garden bed. Two years ago, my husband surprised me with his plan to double the size of my herb garden. Although his intentions were wonderful, we did not anticipate the length of time it would ultimately take to complete the project.  It seemed either he had little time due to his work schedule or, when he did have an expanse of time to work on the garden, our wonderful wet Pacific Northwest weather didn’t exactly cooperate. Removing sod and moving vast amounts of dirt is nearly impossible in the rain.

I have to admit I was growing impatient. My herb plants had all been removed from the garden the previous year into containers and our backyard was beginning to look like a garden nursery. Most herbs have a wild heart and rebel when placed into pots. St. John’s Wort, which I rescued from an area in our neighborhood slated for bulldozing, was languishing in her pot sporting only two long, spindly stems.  Calendula grew leaves, but never blossomed.  The tiny Oregon Grape plant, also a ‘rescue’ was down to one green and somewhat shriveled leaf. There were numerous casualties, as well.

Early spring brought a two week period of perfect weather giving my husband enough time to finish the brick wall surrounding the new raised bed.  After a truckload of garden soil was delivered, the big day finally arrived to replant my herb friends into their new home. Fortunately, I was wise enough to use the down time between the previous summer and winter months to make an inventory of my plants including details of their growing needs, so when the time came to replant, I had a pretty good idea where everyone should go.

As I was finishing up the replanting, I had several small pots with unidentified plants (I am not always consistent with labeling my pots-a bad practice).  As I was placing the unknown entities into the compost, there was one that at the very last moment caused me to stop. Hmmm…this did not look like a weed; its leaf pattern and stem color were too unusual. Then I remembered that over a year ago, I planted some Meadowsweet seed in a little pot, but the only thing that grew was Chickweed, so I put the pot aside. Over one year later, here was a little Meadowsweet plant making her entry into the world. Excitedly, I planted her in the new garden, thinking she probably would not get very large until next year. WRONG! She grew quickly into a very lovely plant, living up to her other name, Queen of the Meadow.  I remembered reading that some seeds can take up to several years before they will germinate- another lesson in patience this year.

I planted the tiny Oregon Grape into the new garden, but she looked like she was barely hanging on. Part of me considered putting her out of her misery and adding her to the compost, but I decided to leave her alone. A week later, her one remaining leaf dropped and she looked like a bare twig…still, I left her be. I was happily surprised when after several weeks, six new leaves appeared. And so it continued throughout the summer. Two small wild rose plants and a tiny English Hawthorne, also rescued from an area near my home slated for ‘development’, took root, growing small but lush green leaves with time and nurturing.

Ah, but there was another lesson to be taught by this lovely new garden-the lesson of boundaries.

When I replanted Comfrey, I carefully placed a collar around the plant setting it down deep into the soil to help contain her wonton growth. Her unabashed expansion in the past infringed on many of the other garden residents and I knew that if she was to co-exist with other plants, her growth needed to be contained. However, several weeks after the thick layer of new garden soil had been added, down on the other side of the garden where Comfrey used to grow were multiple baby Comfrey plants making their way upward through the many inches of soil.  Although I tried to diligently remove the newcomers, one baby plant managed to escape my attention growing quite tall. So much for containment devices! And then, there is the saga of our pumpkin plant.

As the new garden bed is quite large, I decided to add some vegetable plants in between the herbs. I have fond memories of growing pumpkins in my front yard when I lived in eastern Washington, and decided that a pumpkin plant would be a fun addition to the new garden. We bought two tiny pumpkin plants- two different varieties.  The smaller plant never really seemed to do well-it stayed small and its leaves were an off-yellow color. However, after several weeks, the larger plant developed an incredible growth spurt and has not showed signs of slowing down.  Every other evening I trim off several inches of new growth from the ends of the vine, removing multiple leaves which encroach on the herb plants territory. However, this only encourages the pumpkin plant to sprout new off-shoots. Although we have several nice sized pumpkins beginning to turn a lovely orange hue, the vine shows no sign of slowing her march across the garden. The last time I looked, she was headed out of the garden, onto the lawn and attempting to scale the fence.  Her leaves are so large and tightly clustered that I am afraid I may one day find an unsuspecting  neighborhood cat snared in her vine. We have named her Audrey III, after the plant in Little Shop of Horrors and I swear that several nights ago, I heard her say in a quiet, deep voice, “Feed Me.” I was considering cutting most of the vine back, however, the new blossoms are attracting bees, and as their populations are so fragile right now, anything I can do to help them survive is important. So, for now, I just gently prune Audrey III several times a week to prevent her from completely taking over the garden.

As the wheel of the year turns toward Mabon and my lovely garden prepares for its winter rest, I am thankful for the lessons she has taught this summer- patience and boundaries.  She has reminded me that all things have their own tempo for reaching their destinations- we only need to provide the essentials and have patience not to otherwise interfere. I have also been reminded by a small, exuberant pumpkin plant that although we humans think we exert control over our environment, it is Nature who establishes the boundaries, and we really do not have as much influence over Nature as we would like to think.