Singing to the Trees 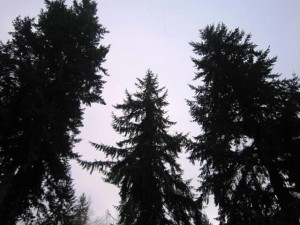 Throughout my study of plant medicine I frequently encounter herbalists who describe their ability to receive healing knowledge communicated directly from the plants themselves. As much as I respect intuitive knowledge, I will admit that I was always a bit cynical about such claims. Sure, I have had those moments when I’ve passed by one of my house plants, did an about-face because on some level I felt it was telling me it needed watering-and yes, those feelings were always accurate. Plants are undeniably living creatures, but having the ability to talk to humans…really?

Last year at the Portland Plant Medicine Gathering, one of workshops’ presenters started off her class by having everyone stand up and sing. I do not like workshops that include singing, games and introductions of the participants-I just don’t. I arrive at conferences psyched to hear the wisdom teachers have to impart about their craft and simply find the other stuff all too distracting. However, as our class was the first one of the day, held early while the Portland autumn morning was still dark, gray and misty, I understood our teacher’s need to get some energy going. She had us all rise and led us in “The Cherokee Morning Song”, in an effort to coax the reluctant sun to come out of hiding and warm our day.  We sang the song four times-once for each direction, and one more time to honour Spirit. When we were finished, the energy in the room had noticeably shifted.

I’ve heard “The Cherokee Morning Song” several times before at Pagan gatherings but was not aware of its history or its meaning. Our teacher explained that it is a song traditionally sung to greet the day, a song of gratitude, of honouring connection to all living things and to Great Spirit.

Following the Gathering, I could not get the song we sang that morning out of my head and realized how devoid of spirituality my daily routine had become. My morning ‘ritual’ consisted of hitting the snooze button on the alarm several times before racing out of bed in time to catch the bus to work before it left the transit mall. As I was mulling all this over early one Sunday morning while staring out the patio door, I glimpsed the three magnificent Douglas Firs that tower over our back yard from the adjacent property. They have always reminded me of sisters huddled together in gossipy conversation and over the years I began referring to them as The Three Sisters.

As I watched the fir trees through the glass door, it came to me that what better way to honour Spirit and give thanks for the gift of this new morning than to sing to these beautiful Douglas Fir trees. I crept across the lawn, and standing barefoot under the protective umbrella of The Three Sisters, I softly sang “The Cherokee Morning Song”.

I continued this tradition each Sunday morning. On days when it was too cold or rainy, I would sing to The Sisters while watching them through the window. As time went on, I began to notice a deep connectedness to these magnificent trees as well as to the other plant life in and around our yard. I began sensing the energy of the plants from a distance. If all was well, there was definitely an upbeat feeling in the garden. If something wasn’t quite right, such as the need for water or issues with insects, the mood was quite different, often a feeling of distress.  I became much more aware to ask before harvesting, explaining my need but being respectful to avoid gathering from plants that sent out a strong, clear message this was not the time for them to share. I also made quite certain to say thank you each and every time I gathered something.

As time went on, my song was sung to include the elements and all the creatures of our yard and surrounding area. I began to notice a sense of trust develop which often allowed me to come within fairly close proximity to visiting wildlife. A squirrel who was raiding the hazelnut mulch I put down for bits of hazelnuts allowed me to come within a foot of where he was diligently working and quietly watch. When I was startled by a garter snake (snakes scare me), instead of my usual reaction of shrieking and running off, I pulled myself together. I stooped down and gently told  the snake that it scares me when snakes slither quickly between my feet and asked that she not do this again. The snake lingered for a long time, lifting her head slightly as if to listen, before slowly turning and slithering away from me.

My relationship with The Sisters deepened, too. No longer did I just look at them merely as trees decorating the landscape, but I began to see them as complex beings. Now when I work in the garden, I take time to smile up at them and say hello. The Sisters seem more aware of me, as well. Several times when I needed fir branches for medicine or other projects, I softly asked The Sisters if they would kindly share a few small branches, and the following day I found all that I needed on the ground.

So far, I had only been singing to The Sisters on Sunday mornings, but I started thinking about ways to incorporate my new morning ritual into my work week. However, leaving as early in the morning as I do, often when it is still quite dark, did not provide much opportunity to do this ….until I remembered another group of trees.

Along the block that I walk each morning to my office building is a row of Maple trees. I noticed their rough bark, evidence of city pollution, and a certain indignity they seem to endure by having holiday lights permanently taped to their limbs, but otherwise, I gave these trees little thought. I started to wonder if anyone ever spoke to them, acknowledging their presence or thanking them for the shade, the oxygen or the beauty they provide. I suddenly had my ‘ah-ha’ moment-my weekday ritual would be to sing to these six trees that I pass by every day.

As the weeks went by, I began noticing a very individual connection to each one. The first tree I encounter is large and jovial-I named him Henry. Next, is Monica-very stately, reserved, and from what I sense, she doesn’t really think much of humans. Steve and Larry, the quiet, shy ‘brothers’ are next, followed by the last two trees on the end of the row, The Guardians, who have a large, protective presence. I end my chanting with a prayer, thanking the Universe for the gift of this precious new day, with all of the joys, the challenges, the opportunities and the lessons it may provide.

In the year since beginning my new morning ritual, I have developed a very strong awareness of not only the plant life around me, but a deeper connection to animals, birds and the elements, as well. I truly feel a part of the web of life in the Universe, grounded, connected. And yes, I often do “hear” the plants speaking their wisdom to me, too. Ho.