“Where, Oh Where, Has the Science Gone?”

There was a time, about 40 years ago, when paranormal research was fueled more by a passion for science and understanding than for fame and glory. It was a time when some of the world’s most prestigious universities were home to large parapsychology departments conducting cutting-edge research and publishing their theories and findings in the world’s top academic journals where they were discussed and graded on their methodology and scholastic merit. It was a great time for the field- before Hollywood and groups using poor techniques and duct-taped equipment stumbled around with night vision cameras looking for ratings rather than answers.

Somewhere, lost in the shadows of the scripted “results”, camera magic, and glitz of reality television’s idea of what paranormal research is, the honest, academic exploration of parapsychology has all but disappeared from the public eye, vanishing into the mists like a Gray Lady on a windy autumn night. Or has it?

For several decades, Duke University ran one of the largest centers for paranormal research in the world: The Duke Parapsychology Laboratory, established in 1935 as part of the college’s main psychology department. Other programs at Stanford and UCLA followed; but the academic environment was about to change.

Remember what happened to Dr. Venkman and company in “Ghostbusters” when they were kicked out? Those scenes were based on the real history of the Duke program when skeptics derided the field of parapsychology as pseudoscience and Duke ended its affiliation with the program. J.B. Rhine moved his labs across the street- literally- and continued the work off-campus that he and William McDougall started as the independent and privately-funded Rhine Research Center.

While it may be true that in recent years the field has become fragmented and underfunded, it still manages to hold on, even as the mainstream scientific community has once again ignored it. John Kruth, executive director of the Rhine, says, “It hasn’t gone anywhere. People have never stopped doing research in these areas, but the skeptic community is strong and vocal, and they’re much better at working the media.”

Kruth points to media-savvy skeptics such as James Randi for much of the academic community’s attitude toward the field. I would have to agree with him, at least in part, but it’s this level of blind skepticism that can’t accept anything that does not fit into rigid definitions and worldviews. Anyone who dares look at other possibilities is immediately labeled a fraud and excommunicated via a round of laughter.

This is a mindset summed up in the words of  Michael Shermer, editor of the quarterly journal, Skeptic, and columnist for Scientific American: “It’s [parapsychology] fallen into disuse due to the fact that there’s just nothing there.”

“Certainly there are fraudulent practitioners out there, and we’re always watching for that,” Kruth said. “It’s like we have the frauds on one side and the debunkers on the other, and we’re in the middle, still trying to do science.”

Critics retort that parapsychology, as a field of scientific study, has a fundamental evidence problem. I would have to agree, but I think Shermer is wrong when he arrogantly claims that “parapsychology has been around for more than a century. (Yet) there’s no research protocol that generates useful working hypotheses for other labs to test and develop into a model, and eventually a paradigm that becomes a field. It just isn’t there.”

At a recent presentation on the campus of Duke University, three parapsychology researchers presented results from their latest studies. The presentation topics:

“Synesthesia, Time and the Geography of Anomalous Experiences”

“Synchronicity and Psi: A Controlled Comparison”

“The Bio-Energy Lab at The Rhine and The O.B.E. (Out of Body Experience) Project”

Other recent research has huge implications in both parapsychology and mainstream clinical psychology. Surely it’s not your Vulcan mind-meld level of telepathy, but researchers came closer than ever to getting one mammal to read another mammal’s mind.

A research team had wired together the brains of two rats, allowing them to transmit information between each other and cooperate. The results, detailed in the journal Scientific Reports, could help improve the design of neural-controlled prosthetic devices and perhaps even show that one day we could network brains as well as computers, or communicate by translating neural activity in the brain into electronic signals. 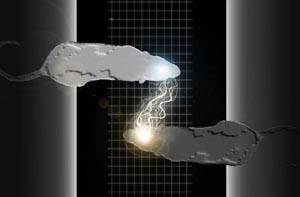 In the experiment, the Duke scientists trained two rats to press one of two levers when a particular light switched on. Next, they connected the animals’ brains with tiny electrodes, each a fraction the size of a human hair, that linked the parts of the rats’ brains that process motor signals. Rat #1 was the “encoder” while rat #2 was the “decoder.” The first rat’s job was to receive the visual cue to press the lever. If it got it right, it got a reward.

As the encoder rat did its task, the electrical activity in the encoder rat’s brain was then translated into a signal and transmitted to the decoder rat. That rat would then press its own lever. For the second rat, though, there was no light cue to tell it which corresponding lever was correct. It could only go by the signal it received from the other rat.

It hit the correct lever an average of about 64% of the time, sometimes up to 72%- a result much greater than possible by chance. To confirm that this was an effect of the signals from the encoder rat’s brain, the team gave the decoder rat the same stimulation, but this time from a computer, with similar results.

Another experiment tested whether the rat’s brain could transmit information about touch. This time the rats were trained to put their nose through an opening and, using their whiskers, distinguish whether the opening was wide or narrow. For wide openings, the rats were taught to poke a computer port on their right. For narrow openings, they poked to the left.

Once trained, the rats were wired to each other. When the encoder rat poked the relevant port, the scientists recorded the brain activity and sent the signal to the decoder rat. The decoder chose the correct side- left or right- to poke 60-65% of the time.

These research models show promise for parapsychologists as they examine psi and other extra-sensory forms of communication.

Perhaps what researchers should do is employ a bit of psychology when publishing their findings to show just how much there is valid “research protocol and working hypotheses” in the field. By running their experiments with parapsychological theories in mind, make no mention of that fact and publish their experiments as typical mainstream neuropsychology, and see just how the scientific community reacts. Then we may be able to see just how deep the animosity and arrogance truly is among the world’s scientists. Remember that some of history’s greatest minds were laughed at in their own time, only to be repeatedly proven correct decades and centuries later, especially once the correct level of technology came along.

Until next month, keep your minds and your eyes open as you peer across the Great Divide. In the meantime, enjoy this video showing the most detailed map to ever be drawn of the human brain: Play Video