A Tale of Prometheus
Prometheus was a Titan who sided with Zeus in the war of the titans. The Titans were then conquered, partly because Zeus released the hundred-handed monsters from their prison, who fought for them with their weapons (thunder, lightning and earthquake), and also because Prometheus took sides with Zeus. Zeus owed him a debt and Prometheus was on Zeus’ good side at the beginning. That changed however in one tale about the creation of ‘mankind’.
Zeus delegated the creation of mankind to Prometheus and his brother Epimetheus. This was in part due to the fact that Prometheus had helped Zeus in the war. Epimetheus went with his first impulse and changed his mind afterwards. He was quite scatterbrained, but Prometheus was very level-headed and wise. Before making man, Epimetheus gave all the gifts to the animals. Including strength, swiftness, courage, fur, feathers, wings and other traits. And he did this until no good was left for man. He then asked Prometheus to help him and Prometheus thought of a way to make man superior. He changed their shape so they were upright like the Gods, and he went to the sun, where he lit a torch and brought down fire, which would protect man more than anything else. He did so without the permission of the Gods.

“And now, though feeble and short-lived,
Mankind has flaming fire and therefrom
Learns many crafts.”

At this point only men were on the earth- no women. Zeus created women later, in anger at Prometheus because of his love for humans, and the fact that he stole fire from the Gods for them. Zeus also was angry at Prometheus for tricking him. Prometheus had cut up an ox and he was told to divide it in two, one half for man and one half for the gods. Prometheus wrapped the best parts in the hide and covered them with innards. Beside this heap he put another pile of bones, but he disguised it by covering it in the fat of the ox. He then told Zeus to pick the pile he liked best, and Zeus took the tempting half that was covered in fat. Zeus became very angry when he discovered he had been tricked, but he had made his choice and needed to abide by it.
Zeus swore to take revenge on Prometheus and he wanted to do this by punishing man as well. Zeus made a ‘great evil for man, a sweet and lovely thing to look upon, in the likeness of a shy maiden, and all of the gods gave her gifts, silvery raiment and a broidered veil, a wonder to behold and bright garlands of blooming flowers and a crown of gold- great beauty shone out from it.’ They called her Pandora, which mean ‘the gift of all’.
The gods then presented Pandora with a box, into which each of them had put something harmful and told her never to open it. Then Zeus sent her to Epimetheus, who took her gladly even though Prometheus told him not to. After, he realized how curious Pandora was and she had to see what was in the box. And after a few days she lifted the lid to see inside and out flew many plagues, sorrow and mischief for mankind. Pandora quickly shut the box- but it was too late. Luckily one good thing came from it- hope. And hope remains to this day a comfort. Once this happened mortals learned that you should never try to trick of deceive Zeus. And Prometheus discovered this too.
Zeus punished Prometheus by getting his servants Force and Violence to seize him and bound him to Caucasus and they told him

“Forever shall the intolerable present grind you down
And he who shall release you is not born
Such fruit you reap for your man-loving ways
A God yourself, you did not dread God’s anger
But gave to mortals honour not their due
And therefore you must guard this joyless rock-
No rest, no sleep, no moment’s respite
Groans shall your speech be, lamentation only your words. “

Zeus also knew that fate, which brings all things to pass, had decreed that one day a son of his would dethrone Zeus and drive the gods from their home in Olympus. Prometheus knew who would be the mother of this son, and Zeus wanted to know that information. Zeus sent Hermes to Prometheus. In response Prometheus said

“Go and persuade the sea wave not to break
You will persuade me no more easily.”
Hermes then told Prometheus that if he did not disclose his secret he would suffer more terrible things.
“An eagle red with blood
Shall come, a guest unbidden to your banquet
All day long he will tear to rags your body
Feasting in fury on the blackened liver”

Nothing could break Prometheus though and his suffering continued. His spirit would not break and he would not give in to brutal power no matter what. He told Hermes

“There is no force which can compel my speech
So let Zeus hurl his blazing bolts,
And with the white wings of the snow,
With thunder and with earthquake,
Confound this reeling world.
None of all this will bend my will”

Hermes left him to suffer, but many years later he was released. There are a few different notions on how this came to be, but I find that the most popular is that while looking for the golden apples that grew on a magical tree of life, Hercules finds Prometheus nailed to the rock. He kills the eagle that torments him and sets him free. In gratitude, Prometheus tells Hercules how to get the apples. 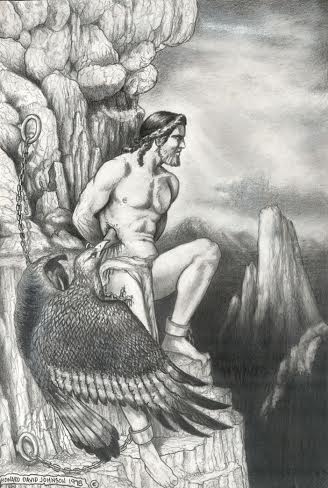 Merry meet! I’m Jazz and I’m a Canadian oddball. I love roller derby, kickboxing, spending time with my dog and husband & love all things art, craft and pagan! I was raised by a Roman Catholic family but discovered Buddhism, then Paganism while in elementary school and have followed the Pagan path ever since. My main deity is Gaia as she approached me in a dream and I feel a very strong connection to her. I love working with runes and absorbing knowledge and working on my never ending book of shadows. I have always been drawn to the arts & have done many crafts and randomness for as long as I can remember. I find it peaceful and it helps settle my mind. I enjoy drawing, painting, cross stitching, doll making, jewelry making and more! I hope to spread my love and passions with others and put as much positivity in the world as possible. Feel free to check out my Facebook and Instagram! Thanks for popping by and Blessed Be!