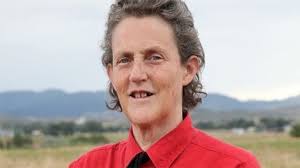 Imagine being smart. Really smart. HaHa. Just kidding. You are smart.
Imagine being super intelligent, a brainiac extraordinaire.
Imagine being autistic.
Imagine being Temple Grandin.
Ms Grandin is a fascinating woman. She has accomplished a great deal, on many levels, and possesses a stunning command of two areas dear to her heart: autism and animal science. Two utterly disparate subjects, you’d think. But, no. Temple Grandin not only colours outside the lines, but, moves them around, if necessary.
Mary Temple Grandin was born on August 29, 1947, in Boston, Massachusetts. At the age of two years, Grandin’s parents were told she was autistic and recommended she be institutionalized. Her mother refused.
Instead, Mrs Grandin arranged for her daughter to engage in long-term speech therapy and hired a caregiver who played with her, talked to her and kept her from retreating into herself. Mrs Grandin also read to her daughter, sometimes for hours at a time. Finally, at the age of four years, Temple Grandin began to speak. There is no doubt in my mind that her mother’s devotion had a hand in this.
Ms Grandin was an outsider throughout her elementary and high school years. Children can be very cruel, and because she was “different,” they teased her. How difficult that must have been! But, despite her social anxiety, lack of social skills and bullying by her peers, Temple Grandin, with great determination, made it through elementary, middle and high schools. She then went on to earn a psychology degree, a master’s and a doctorate, both in animal science. All I can say is, Wow! Very impressive, indeed.
She began working as a consultant to large slaughterhouses, her goal being the improvement of the animals’ quality of life. Her observations of cattle on their way to the processing plants and their subsequent fear, motivated Ms Grandin to redesign the walkways and chutes via which the animals travel in their final moments. It is very interesting to note that she is able to see the world through the animals’ eyes and has stated that many of their fears mirror her own.
Ms Grandin has said she has no interested in emotional issues, nor being part of a relationship. And yet, she knows how animals feel. Mostly because they react the same way she does to the same outside stimuli. This is quite intriguing to me. She finds normal-level noises to be overwhelmingly loud and coping with changes in her daily routine are almost impossible. She does not like to be in social situations and likens it to being “an anthropologist on Mars.” (Dr Oliver Sacks used this description as the title of his 1995 book.)
Temple Grandin has allowed us to have a closer look at the world of an adult autistic person. Her frankness, her understanding of animals, her willingness to write about her life and her readiness to open herself to us, is counterintuitive to the essence of her instincts. She is truly a brave, brave woman.
“You can design a mind to be more social [or] more interested in things. And if we didn’t have people more interested in things, we wouldn’t even have a phone to talk on.” ~Temple Grandin

I strongly urge you to watch this video of Temple Grandin giving a TED talk.