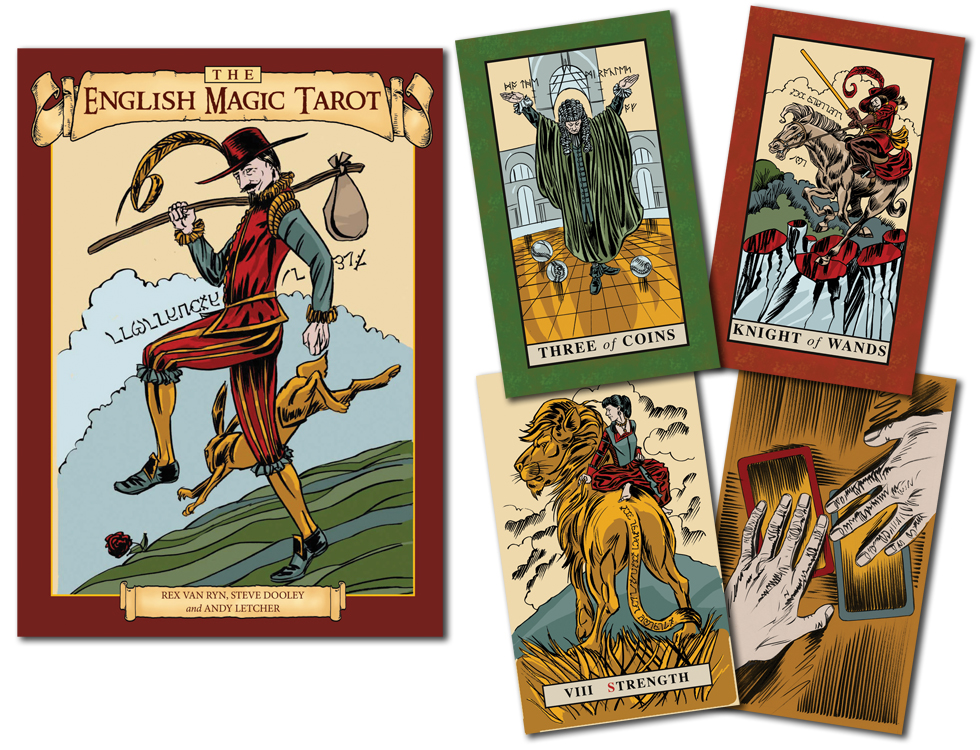 The English Magic Tarot is a Tarot deck created through the combined efforts of Rex Van Ryn, the creator of the thinking behind the deck and the original artwork, and Steve Dooley, the talented artist who provided the vibrant palate of colors found in this deck, and Andy Letcher, the author of the companion book, with plenty of cross-pollination of talents between them all. This 78 card deck and the soft-cover companion book are published by Weiser Books, and they come in a sturdy and brilliantly colored box, the cover of which pictures The Fool of the Major Arcana, a fitting first look at this exciting deck for more reasons than the obvious.

The theme of the deck is set in the 100 years or so beginning with the Reformation Period and the reign of King Henry VIII and running through the end of the reign of Elizabeth I. The Elizabethan era in particular was the golden age of English Renaissance and English Magic, and makes a wonderful setting for this deck. The images of the English Magic Tarot take us through this rich and volatile period, to the time of writer William Shakespeare, explorers Francis Drake and Walter Raleigh, and occultist John Dee, and surround us with hints of lay lines and stone circles, ogham and runes, evocations and charms, and magical objects and mirror script.

The images are compelling and alive, and occasionally seem to be in motion. They are created in a comic book style, making the deck a vibrantly illustrated graphic novel that takes the imagery of a Smith/Waite Tarot, mixes in the unexpected, and brings everything to life. The keywords for The Chariot are “flow” and “movement,” and indeed the image seems ready to explode from the surface of the card. The Star shows Sir Isaac Newton using a prism to split starlight into a rainbow. The Emperor shows King Henry VIII in his later years, sitting with some discomfort on his throne as he deals with the responsibilities of his realm, with William Somer in full fool regalia peeking out from behind a curtain. The Fool, the first card of the Major Arcana, is setting out on his magical quest accompanied not by a dog, but by a hare, traditionally both wise and mad, and wearing the face of Andy Letcher!

The cards are 3 by 4¾, easy to shuffle even if you have small hands, the stock is sturdy enough to encourage regular use of the deck, and the finish is not too shiny. The Major Arcana images cover the entire surface of each card, while the Minor Arcana cards are bordered by a solid (and perhaps too wide) frame with a different color assigned to each suit: red for Wands, yellow for Swords, blue for Cups and Green for Coins. The image on the back of the cards, in keeping with the comic book/graphic novel feel of the entire deck, shows two hands hovering over two cards from the deck as if casting a spread.

The soft cover companion book has 149 pages, and is sturdy and easy to use. The cover is in color, and shows the image from The Moon of the Majors on the front (and here again is the hare, companion of The Fool), and four cards from the deck on the back, two are face down, and two, the Knight of Wands and Three of Cups, are face up, giving us an opportunity to work with the images of the deck before we even open the book. Beside the forward by Philip Carr-Gomm, the book begins with an Introduction containing a brief description of the period in which the deck is based, a definition of English Magic, and a bit of a background of the deck itself and its creation, along with some intriguing hints of surprises that might be hidden within some of the images of the cards.

The card descriptions are broken down to several parts: an image of the card, a few keywords, a Description of the image, an Interpretation of the card, and a possible Reading presented by the card. It is the Interpretation that drew my attention. Each Interpretation is worded in such a way as to draw us into the card itself and the story the image is presenting. Here is where Andy Letcher shines; he includes personal stories and bits of legend or fact regarding people and events connected to the period represented by the deck and the individual card, all meant to open our subconscious to the symbolism to be found in the image and to the story being told by the card. Some sample spreads and interpretations are included at the end of the book, along with suggestions for becoming familiar with the cards and their meanings, and instructions for using the art of memory to create a memory “theater” to assist with interpretation. There is also a resource list of books about the Tarot and high, low, Renaissance or English magic and Druidism, when something about this deck whets your appetite for more.

The English Magic Tarot is way more than what it appears to be at first glance. The structure of the deck and the interpretations of the cards are sturdy enough to offer a good foundation to a beginner, yet soft and flowing enough to encourage improvisation when interpreting the messages of the cards. If you love graphic novels or English Magic, this is the Tarot deck for you. But you don’t need to be a history buff or a Tarot expert or a practitioner of high magic to enjoy this deck. The English Magic Tarot is a bit eccentric, a bit unpredictable, and it connects the Tarot, history and graphic novel art into a sturdy and enjoyable package.