Interview with Supporters of the Water Protectors

How their visit to Standing Rock changed them

(Diane Hasz and Debra Cohen prepare to leave Connecticut with a car packed with donations in November.)

People support Standing Rock for a number of reasons; indigenous rights, thwarting a militarized police force, social justice and others but in the end we all have one thing in common, both women agreed, saying, “We are all connected. Everyone is downstream from one water source or another. Mni Wiconi. Water is Life ” 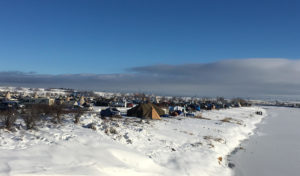 The two drove more than twenty-nine hours from Central Connecticut to the Oceti Sakowin camp at Standing Rock in North Dakota with ideas of how they could be of service, and returned having done the unplanned and unexpected, and with a changed insight on prayer.

It wasn’t as if you walked around the camp and hear praying everywhere, but there was a spirit from which everything operated and you could sense you were in sacred space, she said. 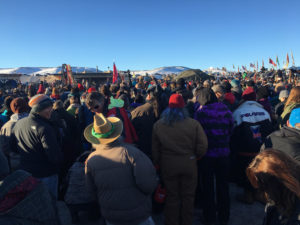 (Water protectors and supporters gather around the sacred fire December 5 to hear the announcement that the easement had been denied.)

“The expectation from the elders and the people who started the movement was that it was going to come from the direction of prayer” – from a place of protection and not protest, she said.

Not sure she could come from that position of prayer, she chose not to visit the front line while she was there. It wasn’t until after her return that she recognized a shift within herself.

“Something in me got a message. It clicked. I don’t know what,” Cohen said. While at Standing Rock, I felt I was in sacred space. I felt that I was in a magical place. I came home less inclined to discount the likely power of prayer.”

On her pagan path, she saw what some of her sisters took literally as being more symbolic.

“That’s in the process of changing, too,” Cohen said. “I feel like I’ve a foot on both sides of the line now and I really appreciate the power of prayer.

“My understanding of prayer before Standing Rock was that prayer was something that we sent out to somewhere or someone or something, asking that someone or something to do something for us. But I came home with a different understanding of prayer, and that is that prayer can be reaching inward to touch the best part of us. Rather than reaching out for something good outside of ourselves to intervene, it can take us inside to touch the best of ourselves that makes us better prepared to act.

“Spirit is within … but I never saw it that way before. So, I came home a changed person. And, I can tell you that I have been prayerful since getting home, in situations that I never would have participated in before.”

Now, when people ask for prayers, “I get what they’re asking for.” She said she hears them “asking me to go deep inside and find a peaceful, forgiving place from which I can be more useful, in stead of going ‘Let’s kill the bastards.’

Seeing the opposition as “redeemable” alters how you interact with those who had previously been labeled the enemy.

Forgiveness is another concept that changed because of her visit.

She spoke of a forgiveness ceremony among natives without going into detail.

“Someone had been falsely accused of something and dealt with very, very severely, only to find out that they were probably not guilty of what they had been accused of, and so people who had done the accusing and people who had behaved in particular ways towards this person were asking for forgiveness.

Cohen said, “Forgiveness is another word that’s been added to my vocabulary in a much more intentional way. I’m very far from being able to say, yeah I can do that now, but I have a better appreciation for it.”

Cohen had thought she would work in the kitchen or offer her Reiki skills in the medical tent. Hasz saw herself able to provide rides to people to and from the camp.

“I needed a purpose,” Hasz said of going. “What my purpose was, was once we were there, was abundantly clear, but it wasn’t anything I thought it would be.

She had no idea before leaving that their hotel room would be a place people came to take showers – 18 over five days. They were also able to provide a safe place for someone who needed it at that time.

Cohen remembered being asked by a native activist on that trip, “So, what tribe are you from.” She found herself answering that she didn’t know. Although she was raised in a Jewish family, she has not followed the traditions, and therefore felt she had no right to call herself a Jew.

The ah ha moment came after she returned home, when she came across a pendant that had been her mothers: it was the Hebrew word for “life” or “long life,” according to Wikipedia. It’s also the symbol for the number of 18, and it drives gifts and donations in multiples of 18.

Seeing that, and adding it to the same chain that holds her coven pendent, Cohen acknowledged that while her Jewish faith might not be spiritual, it was cultural and historical, and was, in fact, her tribe.

Like Cohen, Hasz agreed that one of the lessons they learned reinforced the knowledge that you are always in the right place at the right time, doing the right thing.

“And,” she added, “that right thing is probably not what you thought it would be.”

Also like her traveling companion, Hasz’ definition of prayer was challenged.

“I have a hard time defining prayer because their idea of prayer, I believe, is much different than mine was or is,” Hasz said. “They don’t conjure up things. Even when they’re dancing and drumming, that’s prayer. When they’re walking through the campground, a lot of it is just doing everyday mundane stuff, but you can see how thoughtful [it is being done]. “

She found the mood at the camp “joyful yet solemn.”

“I watched two different families put up their tipis and while there was interaction, like there would be when you’re putting up a tent, it also was done beautifully and purposefully, like a ritual. I think that’s awesome.”

The warriors were acting in prayer, participants in frontline actions were prayerful.

Asked about the sacred fire, she said, “It was quite unassuming.”

(A full moon rises over the camp.)

Yet it was powerful and the space was sacred.

“It never went out. It was truly treated with respect. When you’re sitting or standing near that space, you feel that energy, you truly do. I sat as far back as I could because I wanted to see what was going on without my energy being in there at all,” Hasz said.

The experience of visiting Standing Rock “confirmed the fact that I was right in having to go inward. Just being in a space that was prayerful without being … it’s just really hard to explain that part.”

In December, Cohen flew out to Standing Rock with Sara Ward, a friend who was going to provide psychological first aid to veterans who were arriving at the camps and standing on the front lines.

She and Ward were only able to be at the camp for one day because a severe snowstorm prevented their return. On that day, Cohen recalled, “We decided it was getting late in the day, it was going to be cold. ‘Let’s go back to the hotel; we’ll get a good night’s sleep; we’ll come back tomorrow.’ As we drove toward the south gate, which is the exit gate, there was this line of people, a hand-holding chain, that had been formed and it was going around the entire perimeter of the camp. … I could see this arch of people holding hands, colorful against the snow. I told Sara, ‘Let’s pull over and join this circle.’ So we parked the car and we joined this prayer circle and within a couple of minutes of us joining the prayer circle, this guy comes walking around on the outside of the circle, making this announcement, ‘The easement has been denied. DAPL has been stopped. The easement has been denied.’

“The energy in that circle was absolutely wonderful. I tied my whole new understanding of prayer to that experience of joining the prayer circle.”

After it broke up, the two made their way to the sacred fire to hear the formal announcement.

“This is great, but it’s not the end. The denial of the easement was a temporary stopgap to give them time to do more environmental surveys. So the black snake is not dead,” Cohen said when interviewed in mid-December.

She and Hasz both plan to return.

(Debra Cohen assisted Sarah Ward on a trip to the camp in December.)