Notes from the Apothecary: Snowdrop 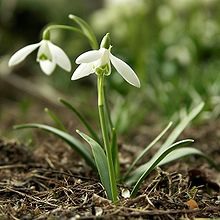 Imbolc is upon us, and I am now seeking snowdrops with every step. Snowdrops symbolise the first stirrings of spring very strongly to me, ever since I placed a closed flower on my altar and within minutes of my ritual it had fully opened; a tiny, star like wonder. Although they grow all over Britain and the US now, they weren’t classed as a ‘wild’ plant until the 18th century, as they were only introduced from Southern Europe in the 16th century. They have some delightful alternative names: February fair maids, Eve’s star, white bells, dew drops and even death’s flower, presumably a reference to the fact that snowdrops are poisonous. As well as causing physical harm when eaten, there are some superstitions that snowdrops are very unlucky, particularly if taken inside the house. There are some English anecdotes of people dying suddenly after someone brought snowdrops in to decorate the home, however I have never suffered any ill effects from using them on my Imbolc altar.

Snow drops are not edible at all, but they are extremely beautiful. If you decide to grow snowdrops, you can usually get the bulbs via mail order, or your local plant nursery. Please don’t dig up bulbs from the woods or from grass verges. The Latin name is galanthus, which you may need if ordering online. One fantastic thing about snowdrops is that they are perfectly happy in shade, so they can be used to fill a space in your garden where other plants would miss the sun. Plant your bulbs in the early fall, in loose soil and a bit of compost. Don’t leave your bulbs too long before planting or they can dry out. Mark the space where you plant them, as when the flowers die down, the ground may look bare again and you may accidentally dig them up!

A fifteenth century glossary classes the snowdrop as an emmenagogue, something which promotes menstruation. There are also hints that it may have been used as a digestive aid, however the effects of the toxin in the plant are actually harmful to the digestive tract.

John Gerard, the 16th and 17th century botanist, claimed that the snowdrop had no medicinal value, but Mrs Grieves disagreed, citing the above information which pre-dates Gerard’s findings.

Currently, there is some research being undertaken into the properties of galantamine and how it can be used to treat Alzheimer’s disease, and galantamine is found in snowdrops as well as some other spring bulbs.

The snowdrop is a clear indicator that spring is on the way, and as such, carries all the symbolism that this implies. You can use snowdrops to symbolise east, the sunrise, new beginnings, air, winters end, and as an offering to Brigid or Persephone. If using on altars, please keep out of the reach of children and animals as they are toxic.

As well as the physical associations with winter’s end, you can take a more metaphysical approach and use the snowdrop as a symbol of something coming to an end that you have been struggling with. Seeing snowdrops in a visualisation or meditation may mean that something in your life is about to change, or that a goal you thought was out of reach may be coming close; look out for opportunities and grasp them when they occur.

Snowdrops represent hope, light and determination. They are so small and delicate, yet they are the first living things to break through the hard, frozen ground. They are the epitome of hidden strength.

If you are troubled by the superstition that bringing snowdrops into the house is bad luck, try drawing or painting some to go in your sacred space instead. You don’t need to be Monet; a streak of green with pendulous white dripping from the tip will do. Experiment and find something that says ‘snowdrop’ to you, and makes you think of the little spears of hope reaching for the sun.

Use your image as a focus for meditation, visualise yourself walking among snowdrops, or finding a sudden patch of them whilst on a woodland ramble. Record how you feel, what else is around you; and sounds or smells that may pop up. Is there a familiar presence? Something you have felt when honouring a particular deity, or perhaps a sense of nostalgia that triggers a childhood memory?

Write down your findings, see how they fit in with your current life situation, and use this time to record your hopes for the coming year.

In Essex, as recently as the 1950s, snowdrops were known as Candlemas bells, further cementing the association with the start of February, and therefore with Imbolc.

Mabh Savage is the author of Pagan Portals: Celtic Witchcraft. She is also a freelance journalist, musician, poet and mother of one small boy and two small cats. Find out more at https://soundsoftime.wordpress.com