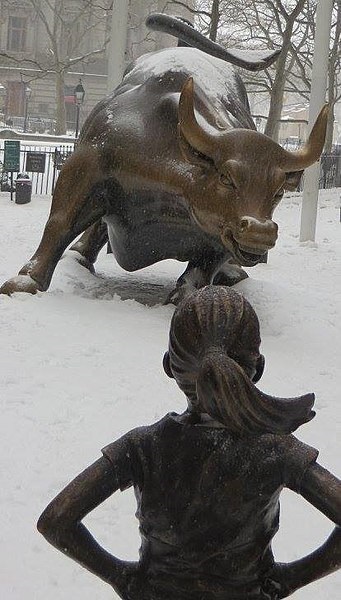 Buckle up! Uranus, the Changemaker, the Awakener, the Great Liberator, arrived in Taurus right after the New Moon on May 15th. It will be in the Bull’s sign (with short forays into Aries and Gemini) for 7 years, until it enters Gemini in April 2026.

It brings with it the legacy of its transit through Aries, which began in 2011. Think back to the Occupy movement, the Arab Spring, the removal of many barriers to same sex marriage, the sudden breakdown of the structures of silence around sexual abuse and harassment in the halls of corporate life, and public questioning of binary gender identity labels. Aries is the sign of the individual and self-identity, and is associated with the planet Mars, who can be an out of control warrior, or a force against injustice. And Uranus got our attention and began to move perceptions and ideas that seemed set in stone until its energy arrived on the scene.

Uranus’ transit into Taurus occurs 84 years after its last visit to this sign, from 1934 to 1942, and is the next spiral in humanity’s journey as filtered through the Taurean energy. The Sign of the Bull holds our values, our resources, and what comes from the Earth. It tends them so they can root and grow to full harvest. Taurus is Fixed Earth, stable, patient – changing over eons – an evolutionary being, not a revolutionary one. It keeps going in the face of formidable odds. In its shadow, it is intransigent, dug in, and unwilling to move, even when movement is necessary. Taurus also rules money, spending, finances; it is the symbol of Wall Street! Venus, Taurus’ ruling planet, speaks to abundance and fertility related to the gifts of Earth – all the beauty and bounty that occurs around us. She evokes the Goddess as Gaia. Uranus is the Tower card, the lightning bolt, immediate change for its own sake – creative chaos out of which something new coalesces. It loves revolution just because it shakes up the old order and forces us to confront what we don’t want to look at or are afraid to see. When Uranus visits Taurus, we expect seismic change in the Taurean areas of influence.

We can get an idea of what to expect from this Uranus transit by looking back at its last journey through Taurus. As a result of the 1929 stock market crash and the ensuing Great Depression, millions were jobless, homeless and starving. Social safety nets like Social Security were created and banking and investment regulations put into place to prevent a recurrence of conditions that led to the crash. Infrastructure jobs created by the government-established WPA resulted in new buildings, roads, power sources and parks. The WPA also employed visual artists and writers to create works for public consumption. The Dust Bowl, caused by drought and unsustainable land use practices, resulted in mass population movement and new approaches to farming and food security. Food rationing and Victory Gardens on the home front during World War II were other manifestations of Uranian energy in Taurus’ realm. Technology like telephones and radio began to be mass produced. Charga-plate, an early form of department store credit card, was developed and came into broad use.

One of the shadow sides of that transit involved the flourishing of economic and political conditions that led to World War II: economic penalties imposed after World War I, questions of boundaries, annexation of land, and people’s right to exist. Appeasement – the failure of people and nations to speak truth to power – also played a role. Uranus in Taurus during this time period was a singular clarion call for humanity to examine what it values and how to rightfully use and respect life and resources.

And we will hear that clarion call again during the current transit. We are seeing debate about the value of social safety nets like Social Security and Medicaid. Just last week there were news accounts of eminent funding issues with Medicare and Social Security and what changes will be necessary to preserve these programs. Medical care itself may undergo widespread change – think medical marijuana vs. heavy opioid prescribing and widespread use of the body’s own defenses and immunities to treat disease. Continued climate change may result in mass population movements and create greater lack of food security. Stronger storms, more “100-year events” and eruptions and tectonic shifts are on the Uranus in Taurus menu. We will see more issues surrounding natural resources and people’s rights, particularly around water, as we have seen recently in Flint, Michigan and Capetown, South Africa, where water is rationed and people are fined for exceeding quotas. We can expect radical changes in banking and currency – crypto or other digital currency! There will be changes in farming and land management technology; keep an eye on the Bayer-Monsanto mega merger, approved by the U.S. Department of Justice on May 29th. (And remember the 1970’s TV commercial “It’s Not Nice to Fool Mother Nature!”) We will continue to see debate around gender identity. Rising pressure on social and cultural norms from women speaking out and running for office will shift ideas around privilege, ownership and hierarchy; remember that Aphrodite was born after Gaia was betrayed by Uranus! https://en.wikipedia.org/wiki/Uranus_(mythology). All of us will be asked to examine what we value on a personal, societal, and spiritual level and to speak truth to power.

Uranus’s move through Taurus is terrifying and exciting at the same time. To synchronize with the energy of this transit, I am focused on sustainability, sourcing more of the food I eat locally, and growing and preserving fruits and vegetables from my garden and the farmers’ market. Know the source of your food and support local farmers where you can. Respect water as a limited resource; there are rainwater collection barrels in my garden. I am working with a lodestone to stabilize my tangible resources and to attract exactly what I need, no more and no less. I practice deep gratitude for Gaia’s gifts – sunlight, sky, stars, trees and all of the life forms here on the planet. I have an emergency kit with food and water to be ready should a natural or man-made disaster strike. I regularly donate resources to organizations that work with local and international disasters. To align with Uranus’ energy of liberation and let the Taurean energy be one of flow rather than stagnation, I am releasing “stuff” that I no longer use or need so that it may find value and purpose somewhere else. That includes expectations and old understandings and beliefs about how ownership, privilege, culture and the social order work. And I am carefully tending what is useful and beautiful, including my physical wellbeing. I am inviting in resilience, opportunity, cooperation and the trickster energy of playing with whatever shows up. When the Bull and Uranus work together, they create an unstoppable force, focused on what we hold dear and the resources that sustain life. Taurus teaches that we must prepare the ground and do the long term tending work needed to create change that will take root and flourish. We are being called to learn how to be resourceful, to share what we have, and to value Earth and each other. This transit will be a wild ride; roll with it but hold tight to your deepest values!

Susan Rossi is a Practitioner and Teacher of Shamanism. She is a long-time explorer of The Mysteries – the connections between mind, body, spirit and how to live in right relationship to all of the energies streaming through the cosmos. She works with clients as an astrologer, coach, ceremonialist and guide to the wisdom that each of us has the capacity to access. Her focus is on guiding clients to unblock and rediscover their inner wisdom, exploration of the birth chart, ceremony, legacy writing, hypnotherapy, energetic healing practice and creation of sacred tools are integral pieces of her practice.