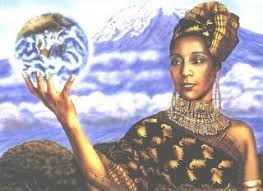 This Mother Earth Goddess was of the Shona-speaking Korekore peoples of Zimbabwe.

She was the Goddess of Earth and the Darkness of Night. It was She who controlled the clouds and the rain, and the pools and the streams.

Dzivaguru was kind and compassionate toward her people. She brought the rain, and with the help of her two beautiful, golden Sunbirds, She brought the sun. Because of Her, Her land was fruitful and abundant.

She lived in a palace which was on an ancient lake. She walked freely, and often, amongst her meadows and forests, drinking from her magical cornucopia, which brought Her everything She could ever wish for.

There came a time when the Sky God’s son, Nosenga, became jealous of Her land and Her wealth. He wanted all that She had and so, decided to just take it from Her.

Dzivaguru was smart, however, and knew his plans, and so concealed all of Her wealth and lands in fog to conceal it. He used a magic ribbon to see and was able to finally find Her palace.

She tried to flee but he set a trap for Her by trapping Her two beautiful Sunbirds, bringing the

Dzivaguru was angered by Nosenga’s actions. He had Her Sunbirds and he took Her lands. She left, but not before taking Her lake, and with it, Her control over the waters and the rain.

She cursed him, saying that his worship would be short-lived and that because he stole Her birds, that the sun would never set and the lands would be parched and cracked because She would not bring the rains. Thus, She disappeared. To this day, Her people still call out to her for rain.