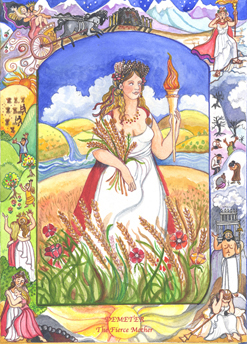 I have always loved Demeter, the Greek goddess of agriculture. Normally, I celebrate her at Harvest. This year, I have reasons for thinking of her earlier…

August is the height of late summer.  That is why, in the central image of this painting, we see Demeter, a gloriously fruitful goddess, bearing golden sheaves of wheat against a background of blazing summer skies, poppies, and flowing rivers. Everything symbolizes the fertility and abundance she showers on a hungry world. How beautiful she is!

In her left hand, however, she bears a torch. And vignettes that tell a less sunny story surround her. It is that story that has earned her second title, The Fierce Mother. That is the story I tell today.

Demeter, provider and mother figure for the whole world, had only one child, a daughter named Persephone. This lovely girl was her pride and joy. While busy with her great task of making the Earth fruitful, Demeter took satisfaction in knowing that her ceaseless labors of love allowed her precious child to be carefree. Persephone could, and did, spend her days dancing in the meadows with her friends, gathering flowers that her mother had nurtured and brought to the peak of perfection. She led an idyllic life!

Then one day, the unthinkable happened. Hades, the lonely King of the Underworld, kidnapped Persephone and took her to his dark kingdom. There, he raped her, and forced her to marry him. All with the collusion of Zeus, King of the Gods, Persephone’s father, and Demeter’s brother!

Demeter was devastated. Taking a torch in her hand, she searched tirelessly for her lost child in every nook and cranny of the Earth. But nobody could tell her where Persephone had gone. She sank into a grief so profound that she abandoned her care for the world. Crops failed. Animals died. Blasted by famine, drought and winter, people died as well. Their cries for help to Mother Demeter went unanswered.

When Demeter finally discovered that Hades had stolen Persephone, she was outraged and demanded that Zeus force Hades to return her.  Conditions on Earth had become so dire that Zeus had to take action.

He ordered Hades to restore Persephone to her mother. But Hades claimed the unhappy girl had just broken her fast by eating seven seeds of a pomegranate – a symbol of marriage in the ancient world. As his wife, she was obliged to remain with him forever.

Zeus made a canny compromise. Persephone would spend 8 months of every year with her mother on Earth. She would return to the Underworld with her husband for only 4 months – after harvest!

Demeter had to be content with this partial victory. Her delight at her reunion with Persephone was great. Soon, Earth bloomed again. A bumper harvest made thanksgiving celebrations more joyful than ever. When Persephone returned to Hades, winter came back with a vengeance. But the Greeks lived in hope. They knew that when she returned, Demeter’s blessing would be restored. They celebrated that…

I honor the great Goddess of Abundance and Fertility. But I am inspired by her example as Fierce Mother.

What mother has not had the experience of having to go look for their child? Of fighting to retrieve them from some danger? It may begin early with a terrifying, momentary loss of a youngster in a grocery store. As they grow older, and life becomes complex, the losses may become more challenging.

I know mothers who have fought fiercely to extricate a lost child from the grip of an addiction. Others have sought to rescue a beloved child from depression, a painful marriage or loss of a partner, financial losses, or eating disorders. At the moment, I, and my family, are facing a life-threatening illness in a cherished son.

At such times, the model of Demeter, Goddess of Agriculture and Abundance, and Fierce Mother, is good to remember.

Demeter refused to abandon the quest to restore her daughter to Life. Her persistence succeeded. Persephone WAS returned to Earth, though she was not the same carefree child she was before her descent into Underworld.

Both mother and daughter were transformed by their experience of loss. Persephone grew up. Demeter discovered untapped resources of strength as well as abundant provision.

But that is a story for another day…

For now, have a blessed August.

Anne Baird, Designer/Owner of GODDESS CARDS, is a self-taught artist who has been painting and writing since childhood. Her chosen media for her unique line of greeting cards is watercolor, with touches of gouache, ink and colored pencil.

Her GODDESS CARD line grew from a birthday card she created for her daughter, Amanda, in 2001. Amanda was disheartened at being a curvaceous beauty in the Land of Thin. (Los Angeles.) That seminal card declaring, “You’re a GODDESS, not a nymph!” evolved into a long line of love notes and affirmations for ALL women. At over 125 cards, the line is steadily growing.

Anne is inspired by the archetypal Legendary Goddesses, who have so much to teach today’s women. Her greatest inspiration however, comes from the Goddesses of Today, who write her with wonderful suggestions and thoughts that expand her consciousness and card line.

She is launching an E-Goddess Card website soon, where the Goddess on the Go can send Goddess “e-cards”, enriched with music and stories, at the click of a mouse. (A virtual mouse.)