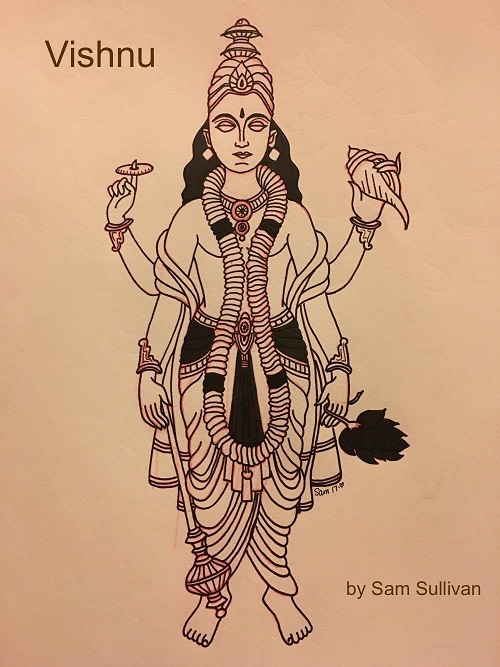 It is said that during troubled times when the world is threatened by evil and chaos, Vishnu returns to restore righteousness. So far, he has reincarnated nine times: Matsya (fish), Kurma (tortoise), Varaha (boar), Narasimha (half lion, half man), Vamana (dwarf sage with the ability to grow), Parasurama (fierce man/hunter), Rama (greatest warrior/perfect man), Krishna (mentally advanced man) and Balarama (Lord Buddha).

Each incarnation Vishnu’s avatar – as a person, an animal or a combination of both – was what was most needed at the time. Myths, legends and stories are associated with each. He rids the earth of irreligious and sinful monarchs, kills a demon, raised the earth up out of the sea, sent a ship to save a sage and his collection of animals from a giant flood so they could repopulate the earth, and held a mountain on his back for 1,000 years while the gods and the demons used a serpent to churn up the ocean of milk to create the nectar of eternal life.

It is believed Vishnu will come one more time as Kalki (eternity or mighty warrior) near the end of the present age of decline in which we are currently living, a time thought to be near the end of this world. He will come – riding a white horse and carrying a fiery sword – to rid the world of oppression by unrighteous rulers and heralding the start of a new golden age.

Vishnu is portrayed with a human body, often with blue skin, and four arms. In his hands he carries four objects representing the things for which he is responsible.

The conch shell in his upper left hand produces Om, the primeval sound of creation. His blows call beings of conscienceless to listen to their inner voice nudging them to seek the truth, and leave the darkness of a material life for a higher reality.

In his upper right hand is the chakra or discus, symbolizing awareness and the universal mind. Called Sudarshan, the disc shows the path to a higher awareness. It destroys ignorance.

A lotus flower in his lower left hand represents a glorious existence and liberation.

The mace, a symbol of mental and physical strength and cosmic knowledge, is held in his lower right hand. It is called Kaumodaki, meaning that which captivates the mind, and is associated with time, which is the destroyer of all things; thus it also related to Kali. When pictured as a deity, it is viewed as a female with two hands, held together in a position of prayer or respect.

The garland of victory Vishnu wears has five rows of flowers that represent the five senses and his mastery of them in the whole universe.

The god is typically seen in two positions. The first is with him standing on a lotus flower with his consort, Lakshmi, close by. He is also portrayed reclining on a serpent, surrounded by the Milky Ocean with Lakshmi massaging his feet.

Vishnu rides on the king of birds, Garuda, an eagle. He is particularly associated with light and especially with the Sun.

“Vishnu is identical to the formless metaphysical concept called Brahman, the supreme, the Svayam Bhagavan, who takes various avatars as ‘the preserver, protector’ whenever the world is threatened with evil, chaos, and destructive forces,” according to Wikipedia.

He is said to expand into everything, permeating all objects and life forms. He maintains the cosmos and he overcomes all. Vishnu represents the goodness that sustains everything, giving shelter and a place to rest, and reaching that is the goal of all living creatures.

According to “Vishnu: Everything You Need To Know,” written by Ambaa Choate for Patheos.com in 2014, “He maintains the world and so he is very popular for worship. A branch of Hinduism views Vishnu as the ultimate Lord of all. That branch is called Vaishnava. Many people who follow Vishnu in particular are highly devotional, hence … lose themselves in singing Hare Krishna; Hare Rama! Those are manifestations of Vishnu, the God who comes to earth and takes physical bodies to help the world. Because of his avatars (human forms) he is someone that you can really personally relate to more than a distant view of God.”

Because he cares for all life on earth, worshiping him – as himself or any of his avatars – helps with protection, prosperity and wisdom.

Vishnu’s day is Thursday. On that day, people wear yellow, offer yellow flowers to Vishnu, and often fast or eat only one meal consisting of only yellow foods,

His birthday, typically in late August, is Krishna Janmashtami, the largest Vishnu holiday.

Krishna “accepts any offering given in devotion to him, whether it be a leaf, a flower, or a single drop of water. He cares more about the intention of a prayer than getting it ‘right,’” Choate wrote.

A ritual presented in the article for invisible protection against enemies or evil instructs that it be done on a Friday night after 11 p.m. and repeated the next 10 nights while remaining celibate the whole time.

Each time, you are to begin by bathing and putting on clean white clothing. Place a white cloth over a wooden bench and on it put a small mound of uncooked white rice on which is placed a Sudrashan Yantra, which is a protection talisman. Sit facing east on a white mat in front of the bench. Look at the yantra and imagine yourself in its center, protected from all evil. Chant “Om Namo Narayanaya Namah,” which means, “I bow to the name of Narayana.”

Offer the yantra white flowers, grains of rice, incense and a ghee lamp.

An article on the astri-vani,com blog notes you can pray to Vishnu: or any of his avatars

The article instructs you to pray only after taking shower and cleaning your teeth. Your clothes should ideally be yellow and clean. Always apply a tilak (a mark worn by a Hindu on the forehead) of yellow sandalwood or a mixture of turmeric and sandalwood.

Don’t touch or be near the Vishnu idol when you’re angry, have ego, are greedy, or full of lust.

To get a wallpaper of Vishnu, visit http://www.bhmpics.com/lord_vishnu-desktop-wallpapers.html.

I also found a 32-minute YouTube devotional video of the 1,008 Names of Lord Vishnu:

It might provide some mood music, or frame your own practice to honor Vishnu. My thought was to listen to it while envisioning myself safe in the center of this Sudarshan Yantra.