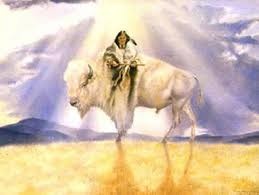 The legend of White Buffalo Woman is an old one and centers around the spiritual practices of many Native American tribes of North American. It centers mostly around the Lakota Nations, but She is also central to other Tribes, including the Sioux and the Oglala. It is important to know that the buffalo are sacred, representing abundance and harmony.

White Buffalo Woman, also known as Ptesan-Wi is a strong, powerful woman, bringing to the North American Native Americans some of their most sacred ceremonies.

The myth, as it is told, tells of two warriors sent out from a Lakota camp, looking for food. Appearing before them was a white buffalo, which transformed into a beautiful woman, dressed in white. One of the men found himself overcome with her beauty and wished to possess Her. He ran to her and they were covered with a black cloud. When the cloud dissipated, the remaining man found his fellow warrior was nothing but bones. She turned to the second man, explaining that his friend had bad intent and that she would not hurt him. She told him to go back to the campsite and build a tipi with 24 poles; adding that She would come to them in four days.

In 4 days’ time, She approached the campsite, once again in the form of a white buffalo, whereupon She turned from white to black to yellow and red before appearing again as a beautiful woman. She carried a bundle, along with a fan of sage leaves. 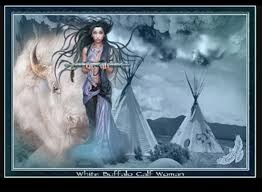 She walked four times around the central fire, walking the sacred and endless circle. As She did so, She filled the sacred pipe – the chanunpa – saying that the smoke was Tunkashila’s breath, the living breath of Grandfather Mystery. She sang a pipe-filling song to the Sky and to Grandmother Earth and to the four directions.

She showed them how all things were connected and taught them about the Earth, their Mother and about Her Mysteries and urged them to always honor Her. She told them that they were to be the caretakers of the Land and to follow the Earth path and to walk it as a living prayer.

As She taught them how to pray with words and gestures, She also brought to them the teachings of the Seven Sacred Rituals, which are the following ceremonies:

Sundance Ceremony (the people’s ceremony for all of the Nations)

White Buffalo Woman stayed with them for four days teaching them all that She would.

She left Her sacred bundle and the White Buffalo Woman Pipe in their care. 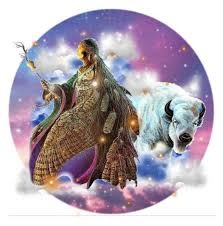 She told them that one day she would return to bring harmony, peace and balance to the world. She prophesied that one day a white buffalo calf would be born and this would be the sign that She would soon be returning.

As She left, She rolled over four times, once again changing from black, red, yellow and finally to white; it was then that a great herd of buffalo surrounded the camp, that was used as food, clothing and bones for their tools. The Lakota honored the Pipe and the buffalo were plentiful.

“It was told that next time there is

she would return again.

She said she would return as

Some believe she already has.”

19th Generation Keeper of the

of the Lakota Nation

“A white buffalo is the most sacred living thing you could ever encounter.”

A white buffalo was born in Wisconsin in 1994. Some say this was the fulfillment of the prophesy; some not.

With Mother Earth in danger and climate change getting worse on a daily basis, when Tribal lands are ravaged to put in pipelines, when administrations dismiss scientific claims, maybe this is the time for White Buffalo Woman to return and bring balance, peace and harmony to the world, and to help save Mother Earth beneath our feet.

“Now, more than any time in history, we need the sacred feminine to balance our lives and to balance our world. We must be spiritual warriors…culling the profound and important aspects of the power of feminine wisdom and directing them toward peace within, as without, and utilizing the energies of the goddess and all mythical women and spiritual heroines to help direct the course of history.”

“A Goddess is a Girl’s Best Friend” 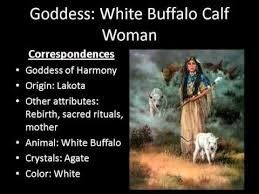