and the Editors of Weiser Books I can’t remember where I found out about this tarot deck. I thought I read about it on a WordPress blog I follow about Tarot and Oracle cards but when I checked the blog to reference it, there was no mention of this Tarot deck, so I must surmise that I discovered this beautiful set of cards somewhere else. I look at hundreds of emails everyday and every Tuesday is Tarot Tuesday, when I focus on nothing other than tarot cards – and oracle cards too – but mostly the tarot – since it is the tarot in which I have the greatest interest. It is not even so much a divinatory diversion for me – I am into the artwork of the cards. But I do use them for divination. Like everyone else, I want to know what is going to happen in my life, even though I am elderly and nothing really happens anymore. But – you never know – do you?

At any rate – no matter where I discovered this deck – I fell in love with it at first sight and had to have it. The whole premise of the deck was bringing it into the twenty-first century, while keeping the original artwork intact – making the people reflect the diversity of the modern world in which we now live. I remember when I first read The Tarot Revealed, by Eden Gray, and her descriptions of the people of the court cards were so cut and dried – the people of the cups were blonde and blue-eyed, the pentacle people were dark and swarthy, the people of the wands were red-haired or blonde and blue-eyed, and the swords people were dark-haired and had brown eyes but pale skin – it was so silly – I knew that there was no way that people fell into those kinds of categories – the suits were about personalities more than looks. I also knew that, within a single reading, sometimes I might be a Queen of Cups and I might be a Queen of Wands – but I do not have blonde hair or blue eyes – I have – or used to have – dark hair like the Queen of Pentacles – and dark eyes. I can identify with any one of the queens – given the situation I am in at the time.

Anyway, I was so excited when The Weiser Tarot was delivered to my mailbox a month ago! I unwrapped it and started shuffling it immediately – I wanted to use it right away. I did unwrap the cards and start shuffling them. They’re made of typical card stock – not too thick, but not thin and flimsy – with a smooth finish on them that made shuffling them effortlessly easy. As I shuffled the cards, I read the “Little White Book”. Years ago, I might have forgone with this, and simply laid out the cards in a Celtic Cross, but now – I read what the creators of the deck had to say first.

I received my first Tarot deck – the traditional Rider-Waite tarot deck – back in 1988, when I was twenty-eight years old. I still have that deck – or parts of it – a puppy of mine chewed up the deck and only some of the cards survived. So I had to buy another Rider-Waite and that’s the one I use now. And of course – like so many of us Tarot enthusiasts – I have quite a few other decks – including Kat Black’s Golden Tarot and Tarot Illuminati by Erik Dunne – as well as numerous oracle and Lenormand decks – but the tarot remains my first love as well as my first divinatory language and the Rider-Waite deck is my go-to deck to read with. I know it so well that I never have to refer to the “Little White Book” or any other tarot book – and I have dozens – when I am doing a reading. It’s like looking in a mirror. I know what I am seeing, even if I don’t like what I’m seeing.

The “Little White Book” was quite informative, much more than “Little White Books” usually are. The publisher’s note mentioned that the project had “essential, early feedback” from tarotists Rachel Pollack, Mary K. Greer, and Theresa Reed (“Little White Book”, 1). These are heavy hitters – anyone who has studied the tarot knows these names.

The “Little White Book” then goes on to tell the history of the Tarot – how it went from a card game to a mystical divinatory tool during the French Revolution – around the same time the Lenormand was moving from a card game to a method of divining – and throughout the nineteenth century, the Tarot and other Occult ideas would grow in popularity. In 1888, The Hermetic Order of the Golden Dawn was founded in England and among its early members was Arthur Edward Waite, who conceived of a new tarot deck. However, he was not an artist, so he hired Pamela Colman Smith, who drew the images that we are now all well acquainted with. The first deck was published in 1909 as the Rider-Waite deck, the “Rider” part referring to the British publisher who produced the deck. And history was made.

The Weiser Tarot was first conceived in 1971 – it’s been a long time to bring this project to fruition. Like the original Rider-Waite Tarot, the deck started with the original pen and ink drawings and then were painted with watercolors – the cards have a lush look to them that are simply gorgeous. The blending of the colors – especially the backgrounds – are some of the most beautiful I have ever seen.
They’re not as visually bright as the Rider-Waite cards but they have a magical look to them that are unquestionably compelling. The background of the Wands are peach-colored or orange; the Swords have a purple background or black or grey; the Cups are various shades of blue; the Pentacles are a lovely green. In general, the Major Arcana have a more dramatic coloring than the Rider-Waite cards. But the major difference is that in all the suits, there are people of all skin colors and with all shades of hair. No more blonde and blue eyes for Cups and red hair for Wands or dark hair and eyes for Pentacles. Anyone and everyone can be represented by any suit whatsoever.

I scanned of some of my favorite Weiser Tarot cards, placed next to the same card from the Rider-Waite deck, to show the similarity and difference between the two decks. Here are some of them: 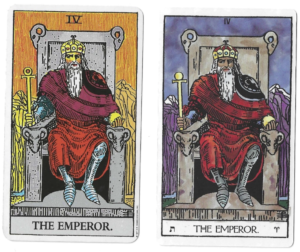 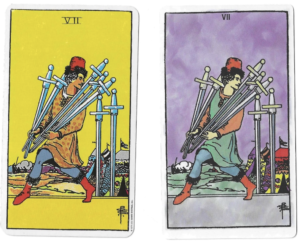 As you can see by the juxta positioning of the cards, the Weiser Tarot doesn’t change the original artwork of Pamela Colman, just the coloring of the pictures and that change in hue makes for a change in attitude! I wish I could show you every card in the deck but I don’t have the space for that here. All I can tell you is that while I love the coloring of the original Rider-Waite deck, I am absolutely in love with this new palate of colors! And I love the diversity of people!

Naturally, the “Little White Book” has Tarot spreads in the rear of the book. There’s a One Card Draw, two Three Card Spreads, The Celtic Cross – what Tarot booklet would be complete without The Celtic Cross? – and a spread that was “designed especially” for The Weiser Tarot, The Ankh Spread (“Little White Book”, 46). I have been using this one lately and I have grown to like it immensely.

This is one of my readings using the Ankh Spread. Lots going here with all those court cards and Majors.

I can’t recommend this beautiful Tarot Deck enough. It’s my new favorite deck and the one I use all the time now. If you want to treat yourself this Yule season, or you know someone who is a lover of the Tarot, go to your favorite merchandising outlet – either brick and mortar or online – and buy The Weiser Tarot. I know you will love them as much as I do.

Weiser Books has, for over 65 years, been the premier publisher of books on esoteric thought and practice—from divination and witchcraft to alchemy, astrology, ceremonial magick, folk magic, Kabbalah, Paganism, and the tarot. Weiser’s mission is to produce books of quality and merit—for beginners and advanced students alike—that are of genuine benefit to their spiritual lives. We prize the integrity, originality, and depth of knowledge of our authors and honor their rich diversity of tradition, race, ethnicity, and sexual orientation. In our commitment to publish “books to live by,” we continually seek out new voices representing fresh perspectives while honoring the classic works that are the foundation of Weiser’s backlist catalog.

The Weiser Tarot on Amazon