Catherine is a 60-year-old Witch, a warm glass artist, caregiver, Grammy and Death Midwife who has been a practicing pagan since 1990. We connected this summer when I was in Connecticut. She’s a caregiver to her husband who has not only survived, but thrives as a 20-year heart transplant recipient. Their experiences dancing on the edge of Death has led her to train as a Death midwife. Birth and Death are spokes on the same wheel; both are initiations and transitions. Death midwifery sits between the roles that hospice and funeral directors occupy, Catherine explained to me as I was beginning to consider hospice for my dad. She works with people to talk about Death, dying, and grief, helping prepare documents to protect their wishes, talk about how they would like their dying process to happen, and final wishes for their body and funeral. As a Grammy who provides daily care to granddaughters 2 and 4 years old, she is fully enveloped in the pulse of life and joy that her grandchildren bring. She took the time to answer these questions.

1. Do you have a magical name you’re willing to share?
Names are extremely powerful. I wish our culture was more open to the taking on of new names when we’ve outgrown them. When I was divorcing my first husband, I knew I didn’t want to use either my maiden name or my ex-husband’s name. I spent months meditating on what my new name should be. I was studying Tarot and knew that my soul card was Strength. While flipping through an Italian deck, the Strength card flipped out. It was called La Forza, and I knew immediately my name had arrived. It fit perfectly the new life I was walking into, though I didn’t know it at the time.

2. In what state do you reside?
I live in Connecticut.

3. How do you make your living?
I am currently retired. My corporate career spanned 30 years in healthcare administration working on HIPAA, electronic medical records, developing outcome metrics to measure the efficacy of treatment, reimbursement reform, and many other healthcare reform initiatives. I wanted to try and change things from the inside, but you can’t rebuild the master’s house with the master’s tools. I took an early retirement offer when it was clear my sanity and conscience would not allow me to continue this line of work and stay healthy. I am looking to evolve my Death Midwifery into a practice once the grands are in school full time.

4. Are you out of the closet? / Have you felt threatened?
I am fortunate to live in New England, where there is a lot of liberty to hold non-traditional beliefs without fear of reprisal. Not saying it doesn’t happen here. I don’t know if there’s a closet that can hold me; I’ve never been one to be silent on any subject.

5. When did you first know you were a witch? How long have you been practicing?
I probably knew from a very young age; the very strict Calvinism I was brought up in made no sense to me. Taking a women’s studies class in 1990 gave me the language, especially reading Merlin Stone’s “When God Was a Woman” and, of course, Margot Adler’s “Drawing Down The Moon.” I met Margot in the very early ’90s and not only circled with her for decades, but was privileged to be one of her caregivers at the end of her life and the last Priestess to tend to her spiritually.

6. How do you define your practice? Do you follow a specific tradition?
I joined an established coven in 1994 that was born out of Starhawk’s Reclaiming tradition. Ouroborous aisis Gnosis was founded by Beth Boneblossom in the mid ’80s and is a consensus-based “leaderful” tradition with no hierarchy. My coven remained active until about 10 years ago, when age, distance, and infirmity finally brought us to the end of that path. We had a more formal ceremonial working group that practiced Israel Regardie’s Middle Pillar exercise which my husband studied for 30-plus years. My solstice work with Margot in Eastern Connecticut was 20 years of amazing women’s mysteries. These days I mostly practice alone, or with my magical partner of 25 years.

7. What one object must be on your altar for it to be an altar?
Stones. Lots of stones.

8. Do you have a daily practice?
Yes, I’ve adapted a passage from Normandy Ellis’s transliteration of the Egyptian “Book of the Dead.” It’s called “The Knot of Isis” and it’s been with me for about 25 years. I have a tattoo that represents it on my arm.

9. How do you respond when someone asks, “Are you a good witch or a bad witch?”
I am more of a believer in the Do No Harm, But Take No Shit school of magic.

10. Do you have a familiar?
Not unless you count rocks.

11. What was your most magical experience?
The first time I experienced the Middle Pillar in a large group…it was like fucking the universe. Chanting with Margot, always a door opening into that ethereal otherworld. Too many workings to count with my magical partner and coven.

12. What gifts, skills, or powers do you share?
I study Tarot, I am a Death Midwife, I’m a nurturer, and a caregiver. These are all powerful magics.

13. What is your favorite:
Sabbat: Samhain because of my proximity to death
Element: Earth, very very Earth, talking to trees and rocks
God and Goddess: I’m atheist, so I believe the gods are archetypes formed in our image to suit our human needs. I work with Isis, Mary Magdalene, Hestia, and the Guadalupe, but I struggle to do more than use them as a language framework.
Animal or other totem: None
Tool: A stone worn smooth by the sea
Tarot deck or card: The Strength card in many decks. I read with Kirk McLaren’s “Tarot Casters.”
Gemstone: Obsidian and quartz crystal
Book: “78 degrees of Wisdom,” by Rachel Pollack
Ritual garb: A red cord for the Knot of Isis, and I’m a sucker for anything flowing and medieval looking.
Fictional witch: Morgan le Fay; Elphaba (from the book, not the musical); and the Bene Gesserit of Dune
Music/Performer: Loreena McKennitt
Spell or ritual: Knot of Isis
Piece of wisdom: Don’t invoke what you can’t banish. 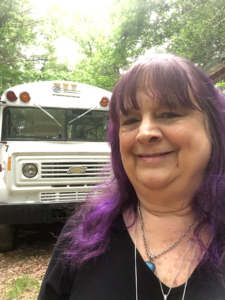