Yeshe Tsogyal was born a princess of Tibet in the year 777 C.E. She was born in the same way as the Buddha; a mantra sounded and her mother bore her painlessly.

Her clan name was Lady Kharchen but she is known as Yeshe Tsogyal, which means Wisdom Lake Queen, as when she was born, a nearby lake increased in size. They are the waters of enlightenment. She is also called “Mother of the Victorious Ones”, meaning the Buddhas, as well as “Lady of the Lotus-Born”. She is considered the Mother of Tibetan Buddhism. She is the ultimate wisdom needed for enlightenment.

While she was married to the Tibetan Emperor, she was also revered as the spiritual consort and disciple of the 8th century Tantric Master, Padmasambhava.

She isolated herself and, in solitude, she began to meditate. She lived through scorn, hunger, torment and rape, as she struggled to live in a male-dominated society. She was transformed by these hardships. She became a fully enlightened Buddha in the form of a woman.

It is said that she is both an incarnation of Vajrayogini, as well as an emanation of Saraswati.

Embodiment is the deepest bliss. My body was made for enlightenment. 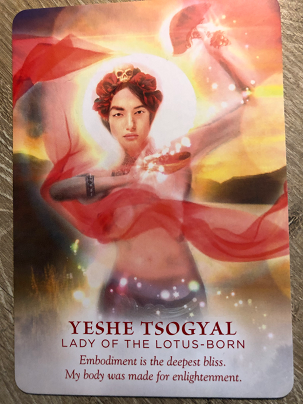 (Image from The Divine Feminine Oracle by Meggan Watterson; photo by Susan Morgaine)

Mother of all the victorious ones, dharmadhatu samantabhadri,

Very kind, only mother who protects the subjects of Tibet,

Bestower of supreme siddhi, chief among the dakinis of great bliss,Yeshe Tsogyal, we supplicate at your feet.

Grant your blessings so that outer, inner, and secret obstacles may be pacified.

Grant your blessings so that the lives of the gurus may be long.

Grant your blessings so that this kalpa of disease, famine, and war may be pacified.

Grant your blessings so that the casting of curses, spells, and sorcery may be pacified.

Grant your blessings so that life, glory, and prajña may increase.

Grant your blessings so that our wishes may be fulfilled spontaneously.

Susan Morgaine is a Priestess, Healer, Witch, Writer, and Teacher.

She is entering her 21st year teaching Kundalini Yoga and Meditation, being a Certified instructor through the Kundalini Research Institute.

She is a Certified Women’s Empowerment Coach/Facilitator through Imagine A Woman International, founded by Patricia Lynn Reilly. She has long been involved in Goddess Spirituality and Feminism, teaching classes and workshops, including Priestessing local Red Tents.

She is a monthly columnist with PaganPages.org Her writings can be found in The Girl God Anthologies, “Whatever Works: Feminists of Faith Speak” and “Jesus, Mohammed and the Goddess”, as well as Mago Publications “She Rises, Volume 2, and “Celebrating Seasons of the Goddess”. She is the author of “My Name is Isis, the Egyptian Goddess”, part of the “My Name is ” series of children’s book. She has also been published in Jareeda and SageWoman magazines.

She is a a Reiki Master and a proud member of the Sisterhood of Avalon. She can be found at MysticalShores.com