The Blackbird: Piper at the Gates of Dawn 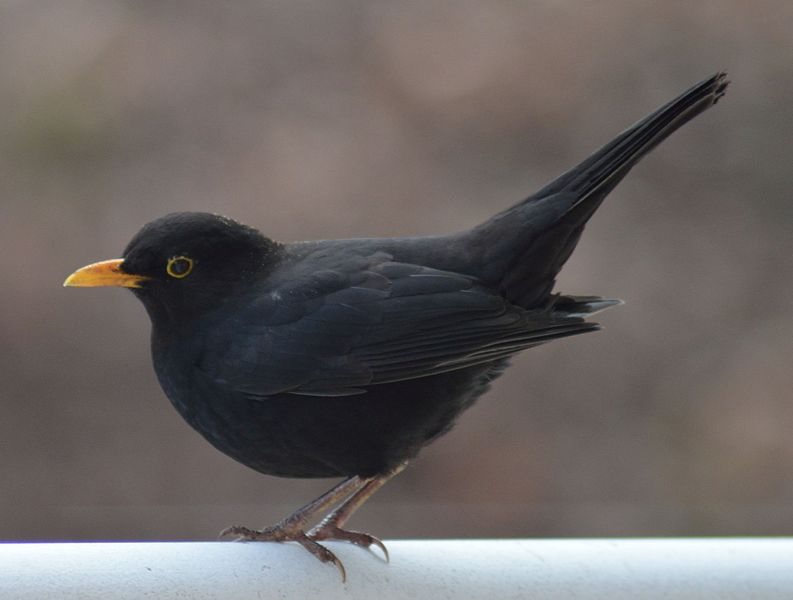 Lon Dubh in gaelic, the blackbird is one of the most liminal birds I have ever encountered. It sings at dawn and dusk, the miniature master of the times of transformation. I have always seen it as the guardian of boundaries; it sings only when things are about to change, to mark the edges of time and space. It was no surprise for me to discover, then, that the Celts associated the blackbird with death and rebirth. Rhiannon, a Celtic goddess or otherworldly being who features in the Welsh Mabinogi, is connected to three mystical birds, possibly blackbirds, who have the power over life and death. They could also sing people into a death like sleep (Birds: Myth, Lore and Legend; R. W Chadd, M. Taylor, Bloomsbury, 2016).

The blackbird pops up at various moments in Celtic or Celtic inspired literature, such as on the shoulder of the mysterious Derg Corra in Finn and the Man in the Tree (Revue Celtique, Tr. Kuno Meyer, 1904). Here the bird shares a nut with Derg Corra, then after Derg splits his apple with a stag waiting at the foot of the tree, they each drink from a white, bronze vessel filled with water, in which swims a trout. I adore this imagery, of this man who shares all that he has with a creature of the earth, a creature of the sea, and a creature of the sky. This feels very druidic to me, and while I wish we knew more about Derg Corra, I also love the mystery, and that the blackbird so often appears at those times of mystery; that which has no explanation, and brings wonder in to our lives.

In Greek mythology, the blackbird would die if it ate the luscious seeds of the pomegranate, a tale which seems to link the bird to Persephone, daughter of Zeus and bringer of spring. Persephone was lured into the underworld by eating the pomegranate, and thus had to live between two worlds; two states. The blackbird, similarly, is most active between two states; between light and darkness.

The piper at the gates of dawn is normally a reference to Pan, but I have transmuted it into my own private title for the blackbird. Especially in winter, I can be found nursing a hot mug of tea, on the doorstep of my home, listening to the blackbirds herald in the sunrise.

Moments of mystery: a sudden burst of blackbird song may indicate you are in the presence of something magical, or that something significant is about to occur in your life.

Boundaries, both protective and between worlds.

Portents of death but also of birth, so careful with this one!

A blackbird feather is a lucky find indeed, and one placed on your altar at east will not only symbolise air and the spirits of the sky, but be a catalyst for any sacred mysteries you explore whilst using the altar in this state. You may also find that if you honour any Celtic deities, they may become more prominent or you may be more aware of them while the feather remains.

Blackbirds are quite prone to albinism, and I remember a school trio where the teacher pointed out a white blackbird that was hopping around the park. He said that the pale bird had been there every year he had been bringing students. I was fascinated, but it wasn’t until much later that I learnt that white variants of normally darker creatures are often messengers from the ‘other world’; either beyond the veil, where the dead reside, or from inside the hollow hills where the fairies dwell. Either way, seeing a blackbird with either partial or full white plumage means you are likely being watched by something not of our realm.

Seeing a blackbird in meditation may mean you are on the cusp of a great change in your life. It may also mean that something that has been static or stagnant in your life for a long time will start to resolve itself, or move forwards. This could be a stale relationship, a job you feel stuck in, or perhaps a period of depression. I suffer from quite low periods of depression, and the blackbirds’ song always reminds me that change is coming. It may not be tomorrow, or the day after, but at some point, I will open my eyes and the sun will have risen on my shadowy mind. After all, as the saying goes, it’s always darkest before dawn.

Mabh Savage is the author of Pagan Portals: Celtic Witchcraft. She is currently writing a new book on the magic of birds, including the wonderful blackbird. Follow Mabh at https://soundsoftime.wordpress.co.uk.