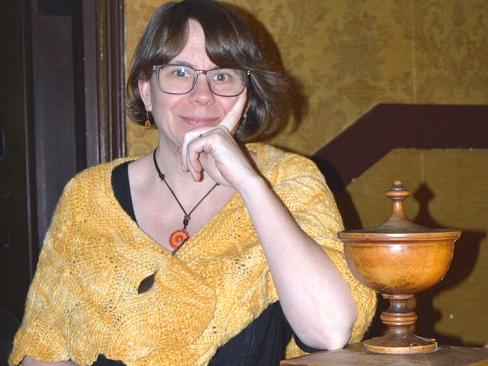 “Jewelry, statues and other swag doesn’t make you a witch. Practicing witchcraft makes you a witch,” Michelle Cunha said. She’s been practicing more than half her life. Soft spoken, she welds a strong energy that requires no accessories. In her quiet manner, she is unapologetically Michelle, giving you the unexpected that goes with her sharp sense of humor. Her experiences have made her convictions stronger as she weaves magic into her daily life.

1. Do you have a magical name you’re willing to share?
I do not have one. For a short time I styled myself as “The Witchill of Witchstead” but when my dreams of owning a small farm became unrealistic I stopped calling myself that.

2. In what state do you reside?
Massachusetts

3. How do you make your living?
I work in the nonprofit industry though most times I am unemployed. During those long periods of unemployment I work on my genealogy.

4. Are you out of the closet? / Have you felt threatened?
Yes. I have felt threatened not with physical violence, but with financial violence. I have been written up at previous jobs for calling in sick on Sabbats as my employers would not give me the day off even though I requested it weeks in advance.

5. When did you first know you were a witch? How long have you been practicing?
It was a slow dawning about 25 years ago but as a child I fully believed and practiced my own kind of magic.

6. How do you define your practice? Do you follow a specific tradition?
Earth centric, loosely Reclaiming. I have reached out to the Reclaiming community several times looking for formal training but have never gotten a response from them so I just go about it in my own way.
I am a Witch who puts her mouth and body on the line: I work for peace and justice, calling out racism, sexism, and all the other isms when I see and hear them. I walk or take public transportation when I can to avoid using fossil fuels. I eat as local as I can, I hang my laundry instead of using the dryer. These are small acts of magic that I use to fuel both my faith and my activism.

7. What one object must be on your altar for it to be an altar?
A three-candle candelabra I got from a friend during that slow dawning I spoke about above.

8. Do you have a daily practice?
Wake up. Eat breakfast.

9. How do you respond when someone asks, “Are you a good witch or a bad witch?”
I only recently was asked this for the first time and I was really taken aback. My response was, “There’s no such thing as a ‘good witch’ or a ‘bad witch.’ Those concepts of good and evil are Christian. Witchcraft does not descend from Christianity, so there is no reason to use Christian ideas to explain Witchcraft.”

10. Do you have a familiar?
Chipmunk

11. What gifts, skills or powers do you share?
Gardening, writing, my activism, and my opinion (whether you want it or not)

12. What was your most magical experience?
At Four Quarters in Pennsylvania, the Samhain ritual was amazing.
Being in a cabin in the Appalachian Mountains with 30 other people was just amazing. Fires and cigars were burnt so it was really smokey and the ritual leader had us all focus on a particular relative we wanted to commune with. I chose my great grandmother Minnie as not much is known about her. It was the first time any spirit had come to me (and the last, incidentally). Minnie and I were able to reach out our hands to each other but did not touch. She faded before I could recapture her. I have not had an experience like that since.

13. What is your favorite:
•Sabbat: Ostara
•Element: Fire
•Animal or other totem: Chipmunks, cats, dogs, butterflies
•Tool: Hands
•Book: Ann Moura’s Green Witchcraft
•Gemstone: Emerald
•Ritual garb: My hat and crown collection
•Fictional witch: Mistress Weatherwax. She’s from the Terry Prachet books. She’s a lot like Professor McGonagle: very no nonsense but full of cold, restrained love.
•Spell or ritual: Flushing shit down the toilet.
•Advice: No one can give you advice.
•Piece of wisdom: Know thy compass. If you do, you won’t get lost.