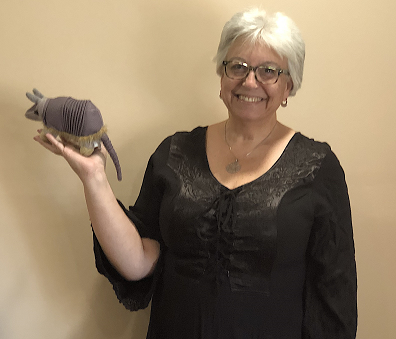 Kim was one of six of us who were founding members of a coven some sixteen years ago that changed over time but continues still, without us. Her strong, calm Taurus presence grounds me when she is near. She has a wicked sense of humor, and owns all her thoughts and behaviors, keeping her real. Kim hosts my stays in Connecticut and we often have wine on the porch and watch the sun set beyond my bus. Her house is modest for her job title, it’s almost done being remodeled, and it reflects her personality. A line she repeats often is, “Every brick in this house is a blessing from the Goddess.”

1. Do you have a magical name you’re willing to share?
I haven’t use it in so long. It’s Ursa Rowane.

2. In what state do you reside?
Connecticut

3. How do you make your living?
I’m an engineering manager at an aerospace company.

4. Are you out of the broom closet? / Have you felt threatened?
That’s an interesting question. No, I’ve never felt threatened. I don’t particularly care what anyone else thinks. I consider myself out of the closet in that I don’t hide, but I’m not “in your face” with my faith.

5. When did you first know you were a witch? How long have you been practicing?
When I was 18; I had moved to Atlanta to go to Georgia Tech and I took tarot lessons and realized I had an affinity for that.

6. How do you define your practice? Do you follow a specific tradition?
I follow a pretty basic Wiccan tradition. I know a lot of my sisters are very Dianic, but I don’t tend to avoid god energy. I very much believe in the necessity of balance in all things.

7. What one object must be on your altar for it to be an altar?
Oddly enough, my talking stick because the end of it is wound with different colors of embroidery floss that made a rainbow; My son made it about 18 years ago.

8. Do you have a daily practice?
No, not an official one. I have my daily rituals, I wouldn’t consider them practical magic. When it comes to my faith, it’s more of a gratitude practice. I remind myself of the little things I am incredibly grateful for.

9. How do you respond when someone asks, “Are you a good witch or a bad witch?”
If someone were to ask method question, depending on the circumstances, I’d answer, “You better hope I’m a good witch.” or “I am a good witch, but I could be persuaded otherwise.”

10. Do you have a familiar?
Yes. Magpie. My daughter bought him home. He was the last left of a litter. No one wanted him because he was a little straggly black cat with a bend at the tip of his tail.

11. What was your most magical experience?
About two dozen women were sitting in circle during a retreat when one sister let go so much emotion, it blew a hole in our circle and I knew I had to keep it from collapsing. Walking around the altar in the center of the room, I kept chanting and pushing the skin of the circle back into place with my hands wherever it shrunk. I didn’t know if I could hold it, but I knew I had to try.

12. What is your favorite:
Sabbat: When my daughter was young, it was Ostara because we’d let the maidens construct the altar. Now it’s Mabon, because that’s when we tend to gather as a sisterhood.

Animal or other totem: The armadillo for sure, but also bear, whales and bats. Moose are pretty cool, too.

Tool: My talking stick. I use it for a lot of things.

Tarot deck or card: My tried and true Rider-Waite. I’ve been using that deck since I was 18 years old. The pages of the book I got to go with it when I was taking those lessons are brown, and there’s notes my 18-year-old self wrote. I own other decks, and I like to look at them, but I don’t read with them.

Gemstone: My grandmother’s birthstone and she loved hem so, even though it’s supposedly bad luck to wear them if it’s not your birthstone – opal.

Spell or ritual: Every time I have to walk into a meeting, I have a little talk with the goddess to have a more powerful presence and it works.

Piece of wisdom:  This took me a long time to learn, and oddly I learned it from my ex-husband. Things are not as dark as they seem. Things can always be worse, so this, too, will pass.