Symbolically, water is seen as a portal to the Otherworld and as a source of wisdom and healing. So, it’s not surprising that Ireland is home to nearly three thousand holy wells. Of these, at least fifteen (many undocumented) are dedicated to the Goddess Brigid. Known by many names of various spellings, she is the daughter of Dagda the great ‘father-god’ of Ireland and many believe she is one and the same with Danu, the first great mother of Ireland.

Located in Liscannor on the western coast of County Clare, Brigid’s Well is one of the many stops on a pilgrimage path that winds its way through Ireland. The Well is about an hours drive from the Shannon airport along the road to Doolin, just a few miles before you reach The Cliffs of Moher.

Brigid the Celtic Goddess of fire (the forge and the hearth), poetry, healing, childbirth, and unity is celebrated in many European countries and is perhaps one of the most powerful religious figures in Irish history.

Appearing small at first this location is deceiving.  There are many different places to visit within it so allow enough time to explore the Well, the cemetery, and O’Brien’s’ monument just across the road.

St Brigit, as she is also known, looks out over the countryside, an idyllic spot to watch the beauty of the rolling hills.

Just behind the statue of Brigid, a small archway leads to a grotto filled with some of the most garish offerings I have ever seen. I myself am guilty of leaving offerings behind, last April I left a small winged plastic dove hanging on a hook in an alcove as a remembrance to a friend that passed.  Although the friend had given me the dove and it made sense for me to leave it, I had to wonder what the stories were behind the items that other people had left.

From baseball hats to beads, moldy picture frames and even a tribute to a 911 firefighter, it seems that everyone had someone to remember or something to honor. I’m told that occasionally the caretakers have to clean out some of the items, and despite the amount of items crammed in this space, the area is very peaceful. You can easily find yourself in quiet contemplation while you look at all of the offerings.

At the end of the grotto is a small well where many people have left coins. There is a saying that Brigid rewards any offering to her, so offerings of coins were often tossed into her wells…the forerunner of the modern custom of throwing a penny into a fountain while you make a wish.

Alongside the outer wall of the grotto, a short flight of stone stairs will lead you to the top of the hill where there is a cemetery that overlooks the well. From there you can see O’Brien’s monument, erected by Cornelius O’Brien in 1853 as a tribute to himself but reluctantly paid for by locals.

We took time for a walk around the site and added our offerings to the growing pile of debris that already claims the grotto in which the shrine exists.

Looking down into the well from the walkway above that leads to the cemetery.

Cemetery located up the hill from Brigids Well 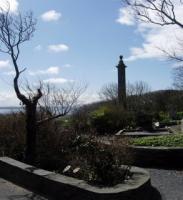 Across from the cemetery is O’Brien’s monument, erected by Cornelius O’Brien in 1853.

The Conversion of Brigid to Christianity

One cannot help but notice the decidedly Christian feel of the statue depicted as Brigid and the obvious story of the conversion that Pagan Gods and Goddesses underwent as Christianity converted them to saints.
A popular folktale is that she was midwife to the Virgin Mary, and invoked by women in labor. Another story was that she was a Druid’s daughter who predicted the coming of Christianity, was baptized by St. Patrick, who then became a nun and later an abbess who founded the Abbey at Kildare.
Unable to eradicate the Pagan Goddess Brigid, the Catholic Church made her a saint. In the fifth century Brigid was canonized by the Catholic Church and became associated with the Christian saint, named St Brigit and so, St Brigit became the patron saint of Ireland.

Even today many Irish homes have St. Brigit’s crosses, they are made from rushes as in the old days and are thought to offer protection for the home.
Visiting Brigid’s Well
As you leave Shannon airport, head toward the Western coast of County Clare, the Well is located in the town of Liscannor. Signposted Liscannor, Clare – Lios Ceannuir, An Clár, it derives its name from ‘Lios Ceannuir’ meaning O’Connor’s Fort. Take the road to Doolin, and it’s just a few miles before you reach The Cliffs of Moher.
Other places to visit while in County Clare are the Poulnabrone Dolmen located near the area known as The Burren, where the combinations of flora and fauna are not found anywhere else in the world. Aillwee Cave where they have an amazing Bird of Prey exhibit and show and The Cliffs of Moher where County Clare meets the Atlantic Ocean.

The town of Doolin is the traditional music capital of Ireland and “Trad” music can be heard almost every night.  Doolin is a lovely base for touring County Clare. A stay at the Doolin Lodge or the Aran View Hotel (in season) is recommend.
Another, even larger well dedicated to Brigid exists in Kildare. Due to directions and timing this past trip, we were unable to make it to the Kildare site. But we will try again on our next trip this coming April and will be certain to share the stories and pictures with you as soon as possible.