Elizabeth Franklin: A Witch’s Tale is a fantasy novel cast in the mold of an early episode of Charmed. It starts with an expositional interaction between two long-dead witches, then introduces a cast of unrelated teenagers acting even less sensibly than teenagers usually do in horror movies. The teenagers decide to start up a virtual reality game in a haunted mansion on Hallow’s Eve, opening up a dangerous portal to the underworld, and blood is soon shed. Mayhem ensues with a series of murders, inept personal deceptions, and other narrative manipulations at the hands of the titular witch.

I won’t spoil the plot, but I will say that Elizabeth Franklin: A Witch’s Tale didn’t motivate me to read the next book in the series, even though everything in the book seemed ordered towards the goal of getting to that sequel at any cost. While there were parts of the book that were amusing, I was generally confused. The book is an easy afternoon read with no big words or cognitively challenging material, and the narrative is easy to comprehend. It wasn’t that I didn’t understand what happened — rather, I didn’t understand why what had happened had happened. The characters were under-developed, and the motivations behind their actions were frequently mystifying. The protagonists’ actions didn’t shape their destiny in any major way, as almost everything in the plot was determined by more powerful characters. After a horror movie-like sense of foreboding throughout the book, and a body count to match, the protagonists seem to forget everyone who has been killed, as well as other nefarious things that were done to themselves, by the end of the book.

While there are both good and evil witches depicted, the antagonist is seen as uniquely evil in her ambition for power, even though power is a clear goal of most witches, including the protagonists of the book. A belief in “God” is mentioned as a pivotal way to avoid possession halfway through the book (although which god is not made clear, nor is religion a factor in the rest of the book) by a character who appears to deliver a bunch of answers with no explanation for why he knows anything about them. This character vanishes after he has provided the necessary exposition to the protagonists, and is also never mentioned again.

The book presents magic in the same way Charmed does: as a matter of rhyming couplets and electrostatic discharges which are only accessible to those with witch-empowered blood, who have gotten it either through empowered DNA from a witching family, or by stealing someone else’s power through violence. Additional power comes from an ancient grimoire whose origins are unclear, just as it is never explained how the original VR game came into the teenagers’ hands. There is no practice, no craft, no spirit relationship, and very little ritual included in this book. As such, it feels antithetical to my own understanding of craft as praxis rather than woo (although I realize that woo is very common in magical fiction, so George is not unique in this approach).

Because this was a self-published book, I don’t know whether it was given a thorough read by a qualified editor. Unfortunately, it really needs further editing. A good fiction editor could have advised the author to remove redundant and dull passages, recast the poorly cast expositional scenes, provide character development and motivation, avoid head hopping and vanishing characters, and otherwise tighten up the plot. As it is, many of the problems in the book boil down to the author showing what should have been told and telling what should have been shown, resulting in bizarre pacing and a lot of extraneous passages that don’t seem to serve the narrative in any way.

There are some fun ideas in the book, and I can see potential in the author. Elizabeth Franklin: A Witch’s Tale is George’s first published novel, so I would like to be forgiving of some of these issues, and it’s clear that many readers have enjoyed the book, as there are a lot of favorable reviews of the book and its sequel on Amazon. If you’re a casual reader looking for a bit of diverting witchy nonsense that can be read in the bathtub, you might enjoy this book. It makes no demands on the reader and it has some fun magical action. But if you’re an avid reader of high-quality fiction and fantasy, you may be disappointed by this book.

Pagan Pages also has an interview with Ron George that you can read here.

In his own words:

What I enjoy the most about writing is that there are so many ways to tell a story. I’ve never shied away from creating a novel based on a storyline that’s been written about before, because there are many points of perspective. That’s the beauty of writing. It’s all about being creative and telling the story through your own eyes. I’m a fantasy fiction writer. I don’t like to be confined, and I think the fantasy genre allows the space for your imagination to flow without being hindered by rules of reality. I’m old fashioned. My method of writing is a pen and a notebook. Unfortunately this makes transferring to digital a nightmare for my editor!

I lived in Maryland all my life, but moved to Florida a few years ago. So, I traded a writing desk in a small stuffy bedroom for an outdoor patio table by the pool. That’s where you’ll find me most of the time, cranking out that next novel! 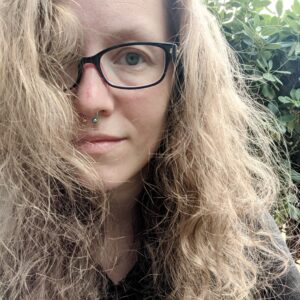 Sarah McMenomy is a visionary artist, author, and witch. Pulling inspiration from trance states, dreams, auras, psychedelia, and the natural world, she weaves together themes of nature and the occult in her artwork and writing. She has created art and written for books, magazines, games, and more, as well as producing digital fine art prints and acrylic paintings.
She is the creator of The Entanglement Tarot, a hex-shaped occult Tarot deck designed for spell-craft.
She is co-runner of Pagan Pages, for which she also writes articles and book reviews, and she also publishes art on her Portfolio site and other work on her Tumblr.

Book Review – Secrets of Santa Muerte: A Guide to the Prayers, Spells, Rituals, and Hexes by Cressida Stone