We are here, the last book in this series! I have to say that this series was an actual adventure. The most difficult task in reviewing them for you is not giving away too much, and still holding your, (the readers) interest.

Our story starts out right where Two Dark Reigns leaves us. At this time, you will know that Jules Malone the Legion Queen of Sunpool is in a very, very bad way.Her legion curse is unbound and she is losing her mind. In no way, shape, or form able to rule anything, let alone a rebellion. Jules, Billy, Camden and Arsinoe, are attempting to forge a plan, looking for a cure and hoping beyond hope that Mirabella has not turned against them. The evidence that sweet Mirabella has left Arsinoe, Billy, and Jules to join her other sister, the Crowned Queen Katherine is damning, and its brought to the forefront by Emilia. (Whom, by the way I find SUPER annoying.)

Mirabella is struggling with a whole lot of emotion. She is hoping that Arsinoe knows her well enough to believe that she has not betrayed her, but that she will understand that her leaving is necessary. Being back in Indrid Down raises every emotion possible. Unsurprisingly, Queen Katherine puts her to the ultimate test with the Mist almost as soon as she arrives. This battle between The Mist and Mirabella, is brutally amazing, but turns deadly very quickly for some.

Crowned Queen Katherine is finding it very difficult to enjoy her previous victory due to the loss of love Pietyr. He, tried to correct his wrong with the Dead Queens and lost. His heart is beating but there is no other sign of life. Was keeping the tattooed crown on her brow worth the loss of her love? Is he truly lost? Can anyone bring him back to her?

Then, Mirabella accepts her offer and arrives in the City, and her power is undeniable. Mirabella’s power calls out to the dead queens that rule Queen Katherine from the inside, and they want Mirabella. Our Queen Katherine realizes very quickly that Mirabella will not be able to help her banish the dead queens. She will need to keep the queens as far away from Mirabella as possible. Queen Katherine finds herself longing for the closeness that she knows Mirabella shares with Arsinoe, as she feels so alone. The doubts and politics of the Black Council swarm around her, and she know some are wondering how they ended up with Katherine as their Queen instead of Mirabella.

So here we are. We have Four Queens, not the three we started with. The Crowned Queen Katherine ruled by the dead, and The Legion Queen, Jules Malone who is fighting her way back to sanity. We have “Queen Mirabella, who has been named Mirabella Mistbane” who is the strongest elemental the Island has ever seen and “The Bear Queen, Arsinoe, who in fact is a Master poisoner, not the naturalist she thought she was.

This whole country’s way of life, questioned, tested, and changed with these women. The Island itself, is demanding change with the calling of the deadly Mist. The end to this tale is called Five Dark Fates…who else’s fate will be changed forever? Will Pietyr wake up? What will become of Billy and his love for Arsinoe? Wise women Luca, who raised Mirabella and now serves Queen Katherine-who will she choose? Will the Dead Queens be the end of Queen Katherine? Will our Legion Queen and her cat Cam be the new ruler of the Island? How many will have to fall to the will of the Island, before a new way of life will start in Fennbirn?

This series is a must read. It is exciting, surprising, enchanting and a true tale of a magickal island ruled by the elements. Elemental politics at its best.

Jade Perri is the owner and founder of Embrace Your Path. Jade is an eclectic Witch, who has been practicing for more than 10 years and offers guidance on an array of topics. She specializes in the art of divination. She is an enthusiastic teacher and offers classes and certification in many different areas. She also holds a special interest in animal communication and handmade custom poppets. She is an avid reader and her passion is the fantasy and British historical fiction genres. She is also the mother of two children, and likes to spend time with her husband. 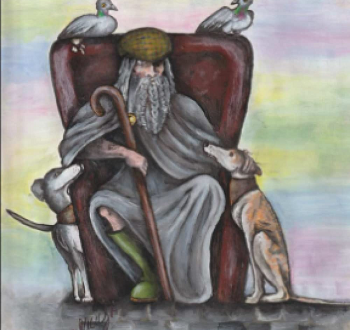 Book Review – Consorting with Spirits: Your Guide to Working with Invisible Allies by Jason Miller