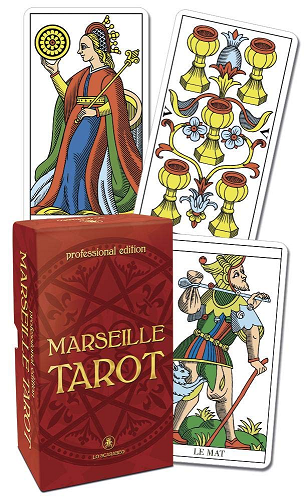 . The illustrations are by Mattia Ottolini and are based on the original work of Nicolas Conver, Paris circa 1760. The Tarot of Marseille is a historic Tarot deck with many versions; the earliest surviving patterns of this deck date to around 1650. The original Tarot of Marseille deck is one of the standard styles from which many Tarot decks of the 19th century and later have been designed.

The Marseille Tarot Professional Edition comes in a sturdy 4 3/8 inch by 7 3/4 inch cardboard box with a red matte finish with gold lettering. The back of the box has a brief description of the deck in six languages. When the cover is lifted, the deck and accompanying guidebook are easily removed via an inner ribbon handle.

This lovely oversized version of the complete Marseille Tarot consists of 78 huge and breathtaking cards measuring 3 7/8 inches by 7 1/8 inches; the pack itself stands 1 3/8 inches high. The card stock is sturdy and durable but soft enough to withstand shuffling; the finish is glossy, nicely slippery, which also aids in shuffling. The color card images have a white background with a black line frame. The Majors have the card number at the top and the name of the card at the bottom. The Minors have card numbers and the Court Cards have the name of rank. The card back is a pattern. The images themselves are stunning and brilliant, a pleasure to look at. The palette is mostly primary colors, adding to the punch of the images.

The guidebook is the same size as the deck; both fit snugly in the box, making it easy to safely carry the deck around. The soft cover is glossy red with the same image as the cover of the box. The guidebook has 128 white pages with large and easy-to-read black text. The book begins with a table of contents; the 25 pages of information provided in English are also provided in five other languages, indicating the international reliance on the Marseille Tarot. The guidebook begins with some interesting information about this deck, including a brief history of its roots, a description of the Major Arcana and the Minor Arcana of the Marseille Tarot, and suggested meanings of numbers and colors. Next is a list of keywords for the Major Arcana and the Minor Arcana. Following are brief descriptions of how to tune into the cards and how to form a question; lastly there is a sample spread and possible interpretations.

This is not a Tarot deck for someone looking to learn how to read Tarot cards. The guidebook does not have card images, and the information provided for each card is minimal. This deck is not about the guidebook; it is about the cards themselves, and their compelling images.

There are differences in the Marseille Tarot itself as compared to some modern decks. The Fool, commonly numbered 0 in many decks, does not have a number. The number XIII card, commonly called Death, does not have a name. In this deck, Justice is the number VIII card, and Strength is number XI. The High Priestess is known as La Papesse and The Hierophant is Le Pape. The Minor Arcana numbered cards do not have illustrations that are related to their meanings; instead the Minors have symbols of their suit: Chalices, Pentacles, Wands and Swords, which precludes using the illustrations to tap into a reader’s intuition.

The Marseille Tarot Professional Edition is made for the professional reader, and using this deck proficiently in a reading would indicate that the reader has done a detailed study of the Tarot, both generally and specific to the symbolism of this beautiful deck. This deck is ideal for Tarot workshops or one-on-one instruction. The visually-impaired would be able to work with this deck with ease 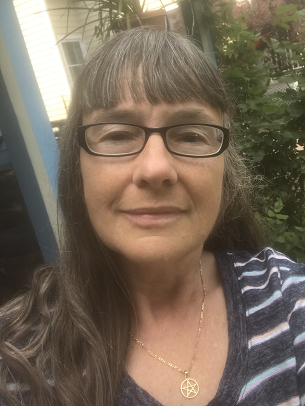 The Emerald Tablet: My 24-Day Journal to Understanding