Notes from the Apothecary: Blackthorn 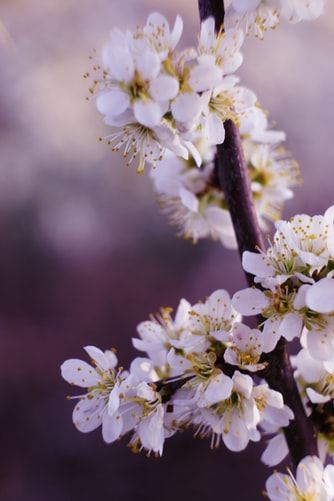 Prunus spinosa, literally meaning a spiny fruit tree, perfectly describes the beautiful yet oh so spiky blackthorn. Blackthorn is a familiar sight across much of Europe, and in Northern England where I live, the blossoms are one of the most impressive displays of spring. Blackthorn blossoms really stand out in the hedgerows because the flowers arrive quite some time before the leaves; white, delicate yet profuse blossoms perched on dark, spiny twigs.

Blackthorn is also intertwined with folklore, otherworldly beings, and magic. It truly is a worthy addition to our apothecary.

Many people will know the blackthorn for its beautiful blue fruit: the sloe. Although tart and unpalatable straight from the tree, sloes impart a wonderful flavour to jams and jellies, but perhaps most famously, sloe gin. Sloe gin is actually a liqueur made by soaking the fruit in gin and sugar, and makes a wonderful gift for any friend who loves booze!

Where I live, it’s believed that you should hold off picking sloes until the first frost has come. This is quite a feat, as if you wait too long, the birds will have all and any fruit the tree produces! Apparently, the frost improves the flavour of the fruit, but some folks simply pop theirs in the freezer to get the same effect. Another reason is (and this is anecdotal folklore passed around the campfire) the fairies/other beings take the first fruits, and it’s polite to wait and take what’s left, preferably until at least after the autumnal equinox. It is always kind to local wildlife to leave some fruit on the tree, whatever your beliefs.

Blackthorn is more a forager’s friend than a garden plant, as although it’s normally trained into a shrub shape, blackthorn grows into massive trees, making it only suitable for rather large gardens.

Blackthorn is associated with a range of medicinal uses, from sympathetic magic to chemically sound uses.

A cure for warts involves impaling a snail on a blackthorn spike and pressing it onto the affected area. The wart should shrivel as the snail dies, according to Anne O’Brien of Folklore Thursday.

Sloes are highly astringent and have been utilized to treat coughs and colds, while boiled blackthorn bark was, according to Eat the Weeds, a remedy for bronchitis among ‘gypsy’ communities. 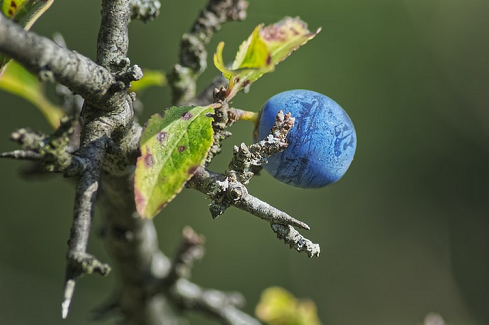 Blackthorn, like hawthorn, is used for hedgerows and marking boundaries, thanks to its natural security properties of massive spikes which can cause a nasty wound if not treated with respect. Blackthorn is associated with “The Other Crowd” or “Good Neighbours”, more commonly known as fairies, and tons of folklore abounds around this spiky and magical tree.

Beyond the ogham connection, blackthorn is an important tree in the folklore of Ireland. These snippets I gleaned from a YouTube video by Lora O’Brien of The Irish Pagan School. Their video on blackthorn folklore is far more in depth and a must for folklore fans! They recount some tales from the fabulous duchas.ie digital folklore collection, including describing how fairies could be seen around blackthorn trees in a particular district, and how locals would never cut a blackthorn tree out of respect for the fairies who played and ate around the trees – and the fear that the fairies would deliver terrible mischief upon them.

Blackthorn is associated with protection; physical, mental, and emotional. It’s a boundary plant, representing liminal places and states, transitions, and transformations. Blackthorn is often used to keep people out, but be careful you aren’t the one who is trapped within!

Blackthorn is also associated with death and dying, and a tale from County Limerick in Ireland recounts how in a soldier’s graveyard, each grave had a blackthorn planted over it. The tale goes that a man saw his fallen comrades alive and well, playing a match of hurling. He fainted, and when he came to, they were gone.

It’s not recommended that you cut branches from a blackthorn, as these trees may be protected. Fallen branches are usually okay to take, but I would recommend leaving an offering; perhaps water for the tree, or an act of service like removing litter. Be careful handling blackthorn. The spikes are very sharp and very hard. It should go without saying to keep it away from children and pets. Gloves are ideal for moving pieces of it about.

If safe to do so, you could place a small piece of blackthorn on your altar or sacred space and use it as a focal point for meditation or visualisation. My personal preference for this would be to strengthen boundaries or to help me gain the confidence to set new boundaries when needed.

As recently as 1925, the liquid and fumes of boiled blackthorn was used by farmers to heal diseases of the mouth in cattle.

All images copyright free via Unsplash.

She is the author of A Modern Celt: Seeking the Ancestors & Pagan Portals – Celtic Witchcraft: Modern Witchcraft Meets Celtic Ways.