Notes from the Apothecary: Jack by the Hedge

I don’t get a huge amount of time to spend keeping my garden super tidy, but that’s ok, because I like it to run a little wild. Because of that, we get plants that come in from outside the garden, often spread by birds and small animals, or simply by seeds blown in on the wind. Once such plant which is a star of British verges and hedgerows is this lovely plant, pictured. It has many names, but my favourite one is Jack by the Hedge, Latin name Alliaria Petiolata.

Jack by the Hedge is also called Garlic Mustard, or even Poor Man’s Mustard. This is because it’s got a flavour which is reminiscent of both garlic and mustard, and is widely available around native woodlands and hedgerows, making it a free seasoning to anyone who wants to go out and pick some! 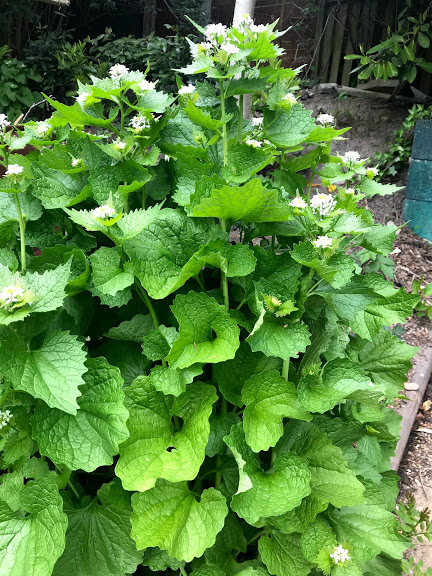 This plant is biennial, which means it has a life cycle of two years. In the first year, the leaves are roundish with saw-teeth like edges. The second year the leaves are pointier and the teeth-like quality (called dentate) becomes more pronounced, particularly in leaves higher up the plant. and in April and May tiny white flowers appear. These eventually produce seed pods, and the light seeds are blown far and wide by the wind to sow lots more garlic mustard for the following year.

Another name for Jack by the Hedge is Sauce Alone because it’s so flavourful, you don’t need many additions in order to create something really yummy. Garlic Mustard Pesto is an easy recipe- blend lots of Jack by the Hedge leaves with some olive oil, pine nuts or walnuts, a bit of parmesan and you can add actual garlic for a really strong flavour. You can add in parsley too. Experiment and see what tastes best.

As a medicinal herb, Jack by the Hedge is chock full of Vitamin A and Vitamin C, good for growth, development and the immune system. In folk medicine, the plant is used as a diuretic- to make you urinate more.

Magically, Jack is a child of the hedgerow and as such associated with liminality and protection. The heat of the spice speaks of an association with fire too, which is appropriate as it is nearly always in flower around or just before the time of Beltane. I won’t pick my Jack by the Hedge flowers for my Beltane altar, although I may use some of the leaves in dishes that I’ll make to celebrate. I’m going to let it go to seed, and maybe next year I’ll have even more Jack by the Hedge in my little wild corner of my garden.

Edges, and hedges, are important in witchcraft. They delineate the boundaries of things- not just physical space, but the boundaries between worlds, between states of mind, states of being, and between mundanity and magic. Plants that form hedgerows are often deeply associated with this kind of magic, and can be seen as either guardians of boundaries or tools with which to transverse those boundaries.

The name ‘Jack’ may be a reference to the fact that another name for this plant is Devil by the Hedge. There’s a piece of folklore that states that the garlicky smell would become more pungent around dusk, warning kids that the devil was on the prowl and that it was time to get home to their parents. Jack, to me though, reminds me of Jack in the Green, the May Day custom of wearing green foliage and joining a joyful procession through the town.

You could make a garland of the leaves and flowers for your Beltane or May Day celebrations, or you could use the white flowers to decorate your sacred space. Alternatively, if you’re lucky enough to have some in your garden, you could sit with your plant and meditate on the season, fire, protection, or simply the peace and calm of your own backyard or garden.

Jack by the Hedge isn’t just good for us to eat. It’s good for wildlife too, particularly the orange tip butterfly. This butterfly lays its eggs on the leaves and the caterpillars use it for food once they hatch. In Britain and most of Europe, Jack by the Hedge is a vital part of the ecosystem. However, in North America and some other places, it’s an invasive species with no benefits and may even reduce the biodiversity of woodlands. That’s why it’s important not to spread plants outside their natural habitat or take cuttings with you if you move overseas.

She is the author of A Modern Celt: Seeking the Ancestors & Pagan Portals – Celtic Witchcraft: Modern Witchcraft Meets Celtic Ways.