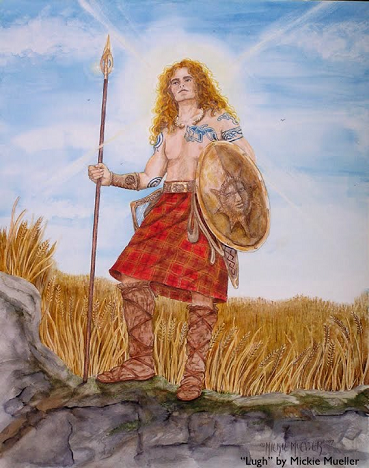 The Celts, who lived in central Europe, worshipped Lugh (or Lug) as their Sun god. He is one of the most prominent gods from Irish mythology with many skills including fierce warrior, master craftsman, harpist, poet, and king. Fulfilling a prophecy, he grew up to kill his grandfather, Balor, the god of the underworld.

Lugh (pronounced Loo) is associated with the festival of Lughnasadh (pronounced Loo-NA-sah), which bears his name. It is celebrated as the first harvest – traditionally August 1 – by those who keep the tradition alive. Astrologically, it falls on August 6, 2020.

He is depicted as a tall, handsome, charming, youthful warrior with curly blond (or sometimes blood red) hair. A silver brooch adorns the green mantle wrapped about him. Beneath that is a knee-length tunic of royal satin. He carries a black shield.

His magical weapons include an unstoppable five-pointed spear that never misses its target, a sling stone, and his hound, Failinis. Lugh is also associated with the raven, crow, and lynx. In addition to being a sun god, he is known as a god of storms, in particular the thunderstorms of late summer.

More than a dozen European cities are named for Lugh including Laon, Leyden, Loudon, and Lyon, which had been called Lugduhum, meaning “Lugh’s Fort.”

According to Wikipedia, “Lugh instituted an event similar to the Olympic games called the Assembly of Taltie which finished on Lufgbasadh (1 August) in memory of his foster-mother, Tailtiu, at the town that bears her name (now Teltown, Meath). He likewise instituted Lughnasadh fairs in the areas of Carman and Naas in honour of Carman and Nás, the eponymous tutelary goddess of these two regions. Horse races and displays of martial arts were important activities at all three fairs. However, Lughnasadh itself is a celebration of Lugh’s triumph over the spirits of the Otherworld who had tried to keep the harvest for themselves.”

In Christian England, the day was called Lammas, meaning “loaf mass,” when the first loafs of bread from the harvest were blessed.

Although an ancient god, Lugh is still honored as a champion of artistry and skill. Bards, artisans, crafters and musicians invoke Lugh for assistance with creativity. 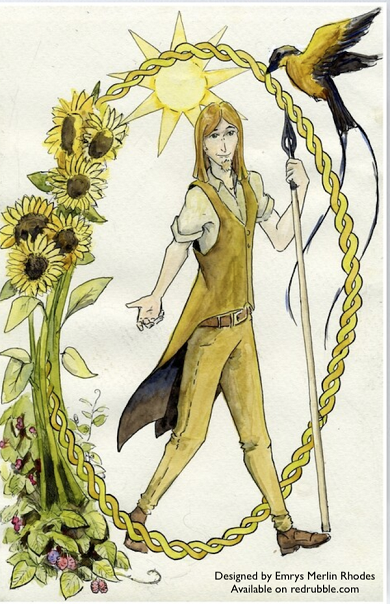 The ancients made offerings in exchange for blessings from the gods; petitioning was a reciprocal act. An offering to Lugh can be tangible such as grain, beer, or an example of your talents and skills such as a song, a piece of art, an offering of time. Whatever it is, let it come from your heart.

Honor him with corn, grains, bread, other symbols of the harvest, dancing and bonfires. One possibility is to thank him for your skills, one by one, pouring a bit of beer and a dropping a piece of bread on the ground for Lugh before taking a sip and a nibble for yourself.